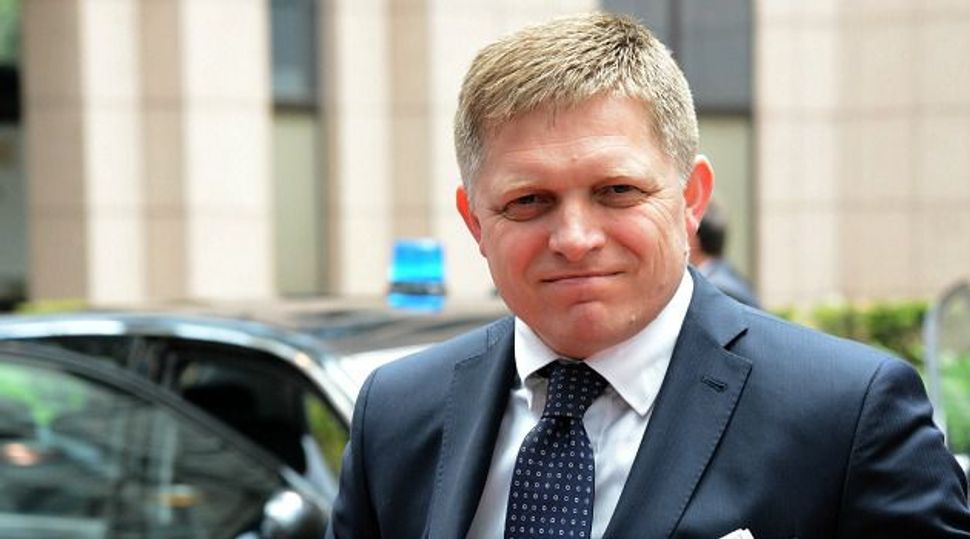 European Jewish groups will honor the prime minister of Slovakia for his “commitment to tolerance.”

Premier Robert Fico is expected in Brussels later this month to receive the European Jewish Prize for Tolerance at an event organized by 17 Jewish groups, including the Rabbinical Centre of Europe and the European Jewish Community Centre, according to an announcement released Wednesday by the EJCC.

In March, a delegation of rabbis from the EJCC and the Brussels-based European Jewish Association lobby group met with Fico in Bratislava and thanked him for his role in designating Sept. 9 Slovakian Jewish Holocaust Memorial day.

“Preserving historical Jewish sites in Slovakia, including synagogues and cemeteries, is integral to the country’s heritage,” the EJCC quoted Fico as saying.

During the most recent Sept. 9 commemoration, the head of Slovakia’s Catholic Church for the first time acknowledged “wrongdoing” by church officials during the country’s main Holocaust memorial ceremony.

It is “important to deepen the consciousness of wrongdoing, which in the past [caused] sons and daughters to move away from the spirit of Jesus Christ and the message of the Word of God,” Stanislav Zvolensky, the chairman of the Conference of Bishops of Slovakia, was quoted as saying by the Slovak news site TA3.

Nearly 70,000 of Slovakia’s Jews were killed during World War II. Slovak authorities collaborated closely with Nazi Germany, concentrating Slovak Jews in labor and concentration camps, from which they were deported to extermination camps, according to Yad Vashem.

Approximately 3,000 Jews live in Slovakia today, according to the European Jewish Congress.