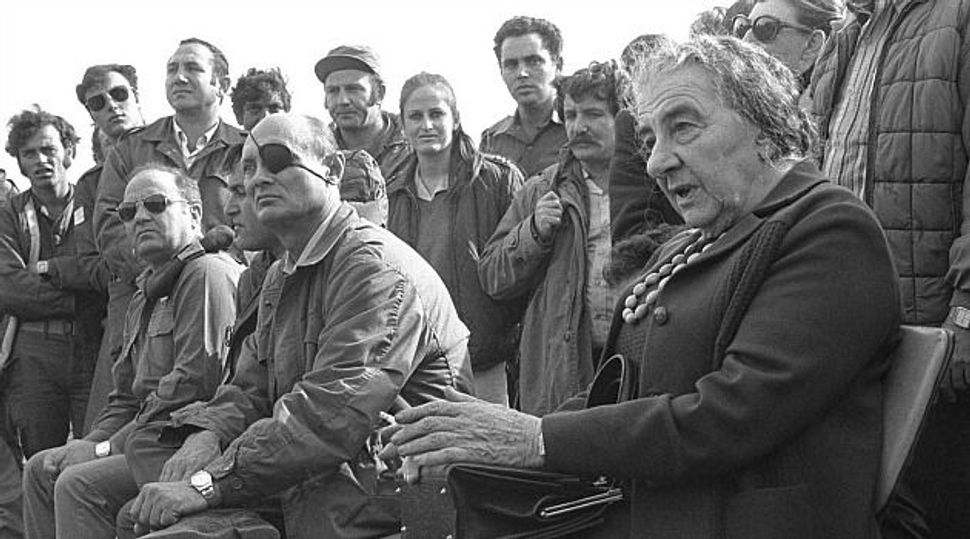 An Israeli former official said that Moshe Dayan had urged Golda Meir to prepare to launch a nuclear strike during the 1973 Yom Kippur War — but Meir refused.

Arnon Azaryahu, a former aid to Israel Galili, a cabinet minister during the war, said in an interview that Dayan, who was defense minister at the time, suggested that Meir, then prime minister, order to begin preparations to enable a nuclear option on Oct. 8, the second day of the war that broke out 40 years ago when Syria and Egypt simultaneously mounted a surprise attack against Israel.

Dayan, Azaryahu said, told Meir that “since the situation is very bad, it would be worthwhile, since we don’t have a lot of time and a lot of options, that we prepare to show the nuclear option.”

Azaryahu said this during a filmed interview published for the first time on the website of the Woodrow Wilson International Center for Scholars. Meir, Azaryahu said, declined.

Egyptian and Syrian forces made initial territorial gains in the early stages of the three week-long war but Israel Defense Forces repelled the advancing Arab troops and penetrated deep into Syrian and Egyptian territory before an armistice was brokered later that month. Some 2,000 Israeli troops died in the war.

The interview with Azaryahu was conducted several years ago by Avner Cohen, a historian who specializes in Israel’s presumed nuclear arms program — a capability which Israel has neither confirmed nor denied as part of its policy of ambiguity on the subject.

Azaryahu was not present in the room when the exchange reportedly took place, he said, but learned about it later that day from Galili, who was present. Dayan had invited Shalhevet Freir, the director general of the Israel Atomic Energy Commission, to Meir’s chambers to begin preparations in case she okayed the request, Azaryahu said. But Golda Meir “told Dayan to forget it,” Azaryahu said.

Freir did not meet Meir but waited outside with Azaryahu, according to the account.