500,000 Throng Streets of Jerusalem at Funeral for Rabbi Ovadia Yosef 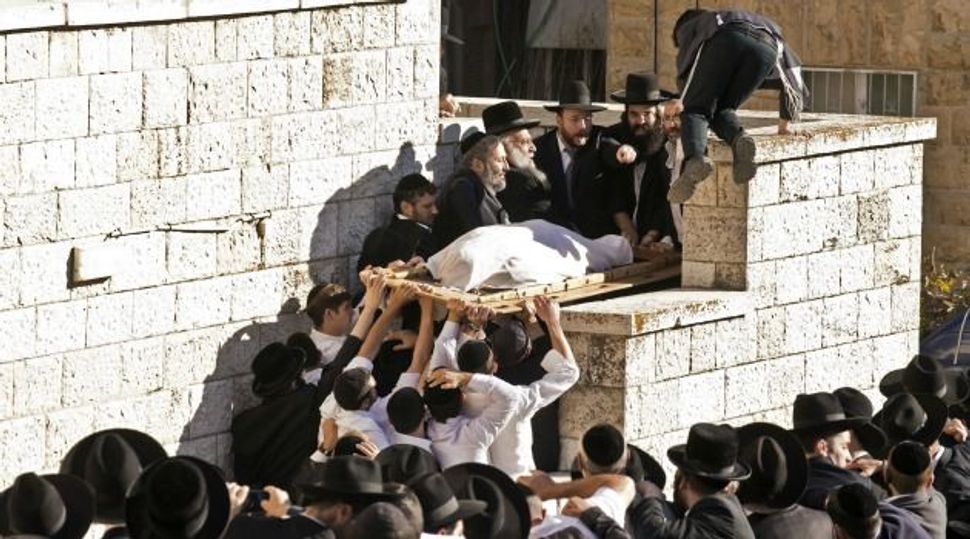 River of Grief: Half a million people filled the streets of Jerusalem for the funeral of Sephardic sage Rabbi Ovadia Yosef, one of the biggest gatherings in memory in the holy city. Image by getty images

More than half a million mourners turned out on Monday for the funeral of Rabbi Ovadia Yosef, an Iraqi-born sage who transformed an Israeli underclass of Sephardic Jews of Middle East heritage into a powerful political force.

Jerusalem’s police chief said the funeral for Yosef, who died earlier on Monday aged 93, was the biggest ever held in the holy city. Streets became a sea of black coats and hats as weeping ultra-Orthodox faithful in traditional garb honoured a cleric they deemed their supreme spiritual leader.

The rush to pay homage to Yosef was so swift that traffic choked the main highway to Jerusalem and mourners abandoned their vehicles to continue on to the small cemetery by foot.

Dubbed ‘Israel’s Ayatollah’ by critics who condemned many of his pronouncements as racist – he likened Palestinians to snakes and said God put gentiles on earth only to serve Jews – Yosef was revered by many Sephardic Jews.

Through the Shas (Hebrew acronym for Sephardic Torah Guardians) party he founded in the early 1980s, Yosef, regal in his gold embroidered robes and turban, also wielded unique political influence from his modest apartment in Jerusalem.

“The people of Israel lost one of the wisest of a generation,” Prime Minister Benjamin Netanyahu said in a statement. “Rabbi (Yosef) was a giant in Torah and Jewish law and a mentor to tens of thousands.”

Jerusalem district police chief Yossi Paryente estimated the crowds of mourners at more than 500,000 along the funeral route, which stretched from a high-tech industrial park to a religious Jewish neighbourhood.

At its height, Shas – now in the opposition – held 17 of parliament’s 120 seats. For years, Yosef as its leader served as a political kingmaker whose party could make or break Israeli coalition governments.

His political messages were sometimes mixed: he viewed the occupied West Bank, captured in the 1967 Middle East war, as part of the Biblical Land of Israel, but in a challenge to mainstream rabbis, he said it was permissible to cede land to prevent bloodshed.

Although Shas served in governments that pursued peace talks with the Palestinians, Yosef voiced strong anti-Arab sentiments in sermons to devotees in Israel and abroad.

“Abu Mazen and all these evil people should perish from this world,” Yosef said in a sermon in 2010, referring to Palestinian President Mahmoud Abbas. “God should strike them with a plague, them and these Palestinians.”

Yosef also drew fire from Israelis when he once suggested that six million Jews had died in the Nazi Holocaust because they were reincarnated souls of sinners.

Abbas, meeting Israeli legislators in the West Bank after news of Yosef’s death, asked them to convey his condolences to the rabbi’s family, said a Reuters reporter who was present. Abbas resumed peace negotiations with Israel two months ago.

Yosef’s heavily Arabic-accented Hebrew may have been difficult to understand, but Shas members followed his political policy pronouncements and the Biblical religious edicts as if they were divine commandments.

His major work, “Responsa, Yabia Omer”, is a 10-volume collection of his rulings on issues of Jewish law and customs.

Weaving a new social fabric in a Jewish state dominated by a so-called elite of Ashkenazim, or Jews of European descent, he oversaw the establishment of Shas-run religious schools and charities that drew a new generation into his rabbinical fold.

Outside his home, weeping seminary students tore their white shirts with a razor blade in a traditional sign of mourning.

Israel’s ambulance service said its crews were busy treating people who fainted in synagogues and at Jerusalem’s Western Wall, a Jewish holy site, after learning of Yosef’s death.

Born in Baghdad, Yosef arrived in Jerusalem when he was four and was ordained as a rabbi at the age of 20. In 1947, a year before Israel’s founding, Yosef went to Cairo, where he headed its rabbinical court and became Egypt’s deputy chief rabbi.

In 1950, Yosef returned to Jerusalem, serving as a judge in religious courts that deal with family matters and divorce and served as Israel’s chief Sephardic rabbi from 1973 to 1983, a post now held by his son Yitzhak, one of his 11 children.

Yosef had been in failing health in recent months. President Shimon Peres visited his bedside on Monday in Jerusalem’s Hadassah hospital, joining a steady stream of Shas politicians and top rabbis.

Four rabbis have been mentioned as possible successors, but with Shas outside Netanyahu’s government, their political influence is likely to be limited.

500,000 Throng Streets of Jerusalem at Funeral for Rabbi Ovadia Yosef