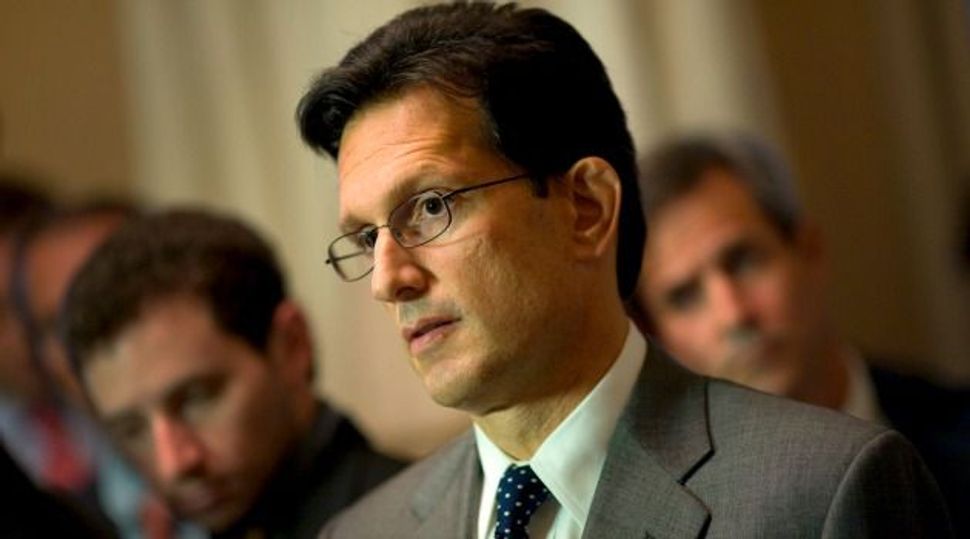 (JTA) —The first lawmaker to speak at a closed-door Capitol Hill confab convened by the Republican Jewish Coalition’s women’s affiliate was, naturally enough, a woman. So was the second.

Against the background of the current federal budget battle, that’s about all that united Sen. Kelly Ayotte (R-N.H.) and Rep. Michele Bachmann (R-Minn.).

Ayotte has been a leading Republican voice calling on her GOP colleagues in the U.S. House of Representatives to stand down in their battle over President Obama’s signature health care law — a fight that led last week to a shutdown of the federal government. Bachmann has been a leader among those urging them to hold the line.

Judging from the RJC’s Twitter feed Tuesday from the Capitol Hill Club, the white linen establishment near the Capitol where the coalition’s National Women’s Committee was hosting its event that day, both women received an equally warm reception.

But the genteel veneer can barely paper over the sharp divisions among Jewish Republicans as they watch their party rend itself over an impasse that has ground government operations to a halt and could presage an unprecedented default on the national debt.

“My party has magnificently grabbed defeat from the jaws of victory,” said Fred Zeidman, a Houston-area lawyer and major donor to Republican presidential campaigns.

The current crisis stems from the refusal of the Republican-controlled House of Representatives to pass a federal budget unless Obama agrees to delay or defund aspects of the 2010 health care law known as Obamacare. The president has refused to negotiate, arguing that the Republicans are threatening to blow up the national economy because they oppose a measure already duly passed into law.

Zeidman made it clear that he blamed both sides. Obama should agree to negotiate with his Republican counterparts, he said, and the Republicans should adopt a continuing resolution that would permit the government to keep functioning. Failing to do so, Zeidman said, would cost Republicans at the polls next year.

“Am I against Obamacare?” he asked. “Yeah. Am I going to shut down the country over it? Never.”

Zeidman, who said he had personally urged House Speaker John Boehner (R-Ohio) to bring an unconditional funding authorization to the floor, blamed a cadre of about 35 to 40 conservative Tea Party Republicans in safe House seats for holding the national party hostage.

“These are the zealots,” he said. “They love this stuff. What are they going to do when they see we lose elections?”

Jewish Republicans by and large have been reluctant to address the issue.

Cantor, who supports the party’s strategy, earned cheers at the Capitol Hill Club meeting for calling on Obama to negotiate with Republicans, according to tweets from conservative blogger Melissa Braunstein, who was present.

“When you have divided government, you work through things by talking,” she quoted Cantor saying. “This is about more than Obamacare or the debt. We have a real debate about the balance of power.”

More telling, perhaps, was how expansively the RJC’s own Twitter feed reported the remarks by Ayotte, who has said elsewhere that the shutdown is not a “winning strategy.”

According to the tweets, Ayotte sharply criticized the isolationist faction within the GOP that has helped drive the shutdown, arguing that it was harming the U.S. on the world stage.

The RJC tweeter followed up:

“Ayotte: ‘Withdrawing from the world is not an option.’ Predicts Reagan wing will win debate with isolationists within GOP.’ ”

A senior Jewish Republican aide in Congress said the Tea Party wing deserved praise for galvanizing Republicans following the demoralizing Obama victory last November. The shutdown, said the aide, would open up a broader philosophic conversation about the role of government.

“Soon we’ll shift the message to spending, what type of government we have, what kind of country we want to live in,” the aide said.

The aide dismissed claims that shutting down government is an illegitimate tool, a way to roll back a despised law that Republicans were unable to repeal through normal legislative tactics. He noted that Tip O’Neill, the esteemed Democratic House speaker in the 1980s, had shut down the government several times.

Mel Sembler, a Florida real estate magnate who, like Zeidman, is a major fundraiser, recalled that President Bill Clinton agreed in 1996 to negotiate an end to a government shutdown with Republicans. Democrats counter that no previous government shutdown was aimed at undoing settled law.

The aide said that notwithstanding some complaints from moderates, the response from party members countrywide — including from donors like the billionaire industrialist Koch brothers — had been positive.

“They’ve been spoiling for a fight for years,” the aide said. “They’re thrilled we shut the government down.”