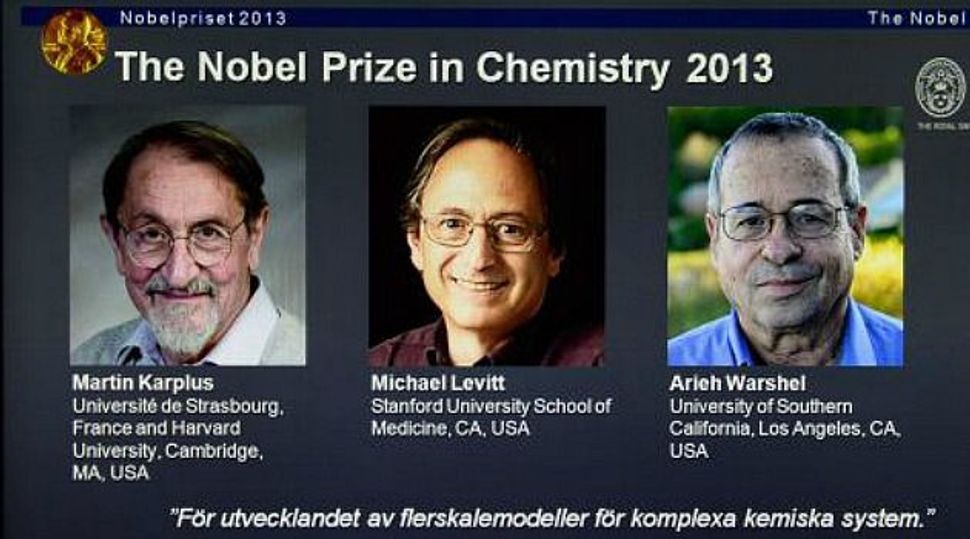 Three Jewish scientists won the Nobel Prize for chemistry on Wednesday for pioneering work on computer programs that simulate complex chemical processes and have accelerated progress in areas from drugs to solar energy.

The Royal Swedish Academy of Sciences, awarding the prize of 8 million crowns ($1.25 million) to Martin Karplus, Michael Levitt and Arieh Warshel, said their work had effectively taken chemistry into cyberspace. Gone were the days of modelling reactions using plastic balls and sticks.

“Today the computer is just as important a tool for chemists as the test tube,” the academy said in a statement. “Computer models mirroring real life have become crucial for most advances made in chemistry today.

All three scientists are Jewish. Warshel, 74, received his bachelor’s degree in chemistry from the Technion in Haifa and his masters and PhD in chemical physics from the Weizmann Institute. He joined the faculty of USC in 1976. Pretoria-born Levitt teaches at Stanford University.

In drug design, for example, researchers can now use computers to calculate how an experimental medicine will react with a particular target protein in the body by working out the interplay of atoms.

But the approach also has applications in industrial processes, such as the design of solar cells or catalysts used in cars.

Ultimately, the ability to computerise such complex chemical processes might make it possible to simulate a complete living organism at the molecular level – something Levitt has described as one of his dreams.

“It’s like seeing a watch and wondering how actually it works,” Warshel, talking about the use of computer programs, told reporters in Stockholm by phone link.

“You can use it to design drugs, or in my case, to satisfy your curiosity.”

Warshel, a U.S. and Israel citizen, is a professor at the University of Southern California, Los Angeles.

Chemistry was the third of this year’s Nobel prizes. The prizes for achievements in science, literature and peace were first awarded in 1901 in accordance with the will of businessman and dynamite inventor Alfred Nobel.

“It has revolutionised chemistry,” Kersti Hermansson, professor in organic chemistry at Uppsala University, said of the computer modelling.

“When you solve equations on the computer, you obtain information that is at such detail it is almost impossible to get it from any other method … You can really follow like a movie, in time and in space. This is fantastic detail.”

“With that knowledge you can solve problems, determine why things happen – energy problems, corrosion, chemical reactions, materials, why the properties are how they are and how you could improve them to design better materials.”