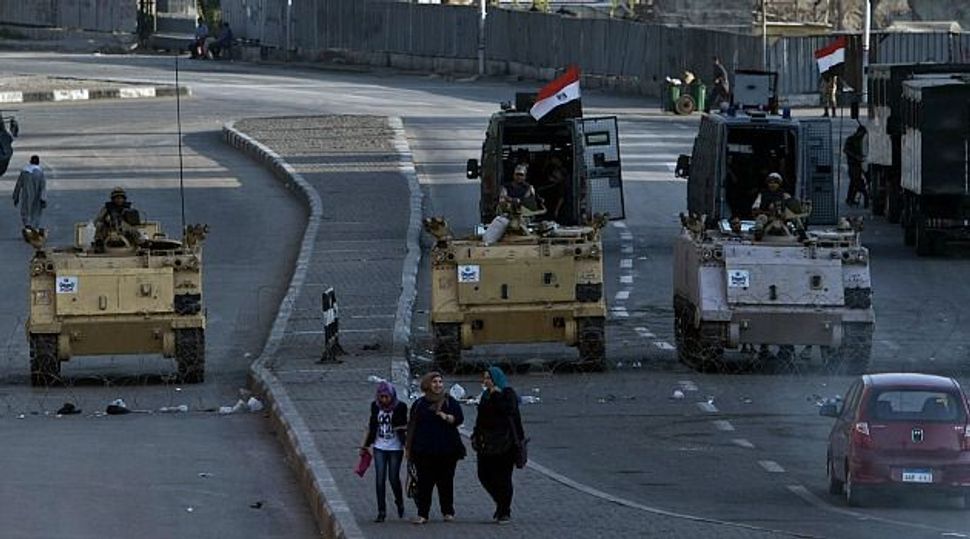 WASHINGTON (JTA) — The Obama administration is suspending delivery of some “large scale military systems” to Egypt but will maintain assistance that will help secure its border with Israel.

“The United States continues to support a democratic transition and oppose violence as a means of resolving differences within Egypt,” said a statement released Wednesday evening by Jen Psaki, a State Department spokeswoman.

It added that the United States would “hold the delivery of certain large-scale military systems and cash assistance to the government pending credible progress toward an inclusive, democratically elected civilian government through free and fair elections.”

In recent weeks, however, as the Egyptian military has stepped up its crackdown on Brotherhood-affiliated opponents of the regime, the Obama administration has signaled it would reconsider aid.

Psaki in her statement did not say how much of the $1.5 billion in annual assistance — $1.3 billion of it in defense aid – would be cut, but she outlined areas where assistance would continue, suggesting that at least some of the defense aid would be diverted to civil society programs.

“The United States will work with the interim Egyptian government and Congress to continue to provide support that directly benefits the Egyptian people in areas like health, education, and private sector development,” she said.

Defense assistance would continue in areas close to Israel’s border, according to Psaki’s outline.

“We will continue assistance to help secure Egypt’s borders, counter terrorism and proliferation, and ensure security in the Sinai,” she said. “We will continue to provide parts for U.S.-origin military equipment as well as military training and education.”

Israeli officials had earlier in the week urged continued Western support for Egypt’s military ruler, Gen. Abdel al-Sisi, seeing him as the best guarantor of the 1979 peace treaty with Israel.