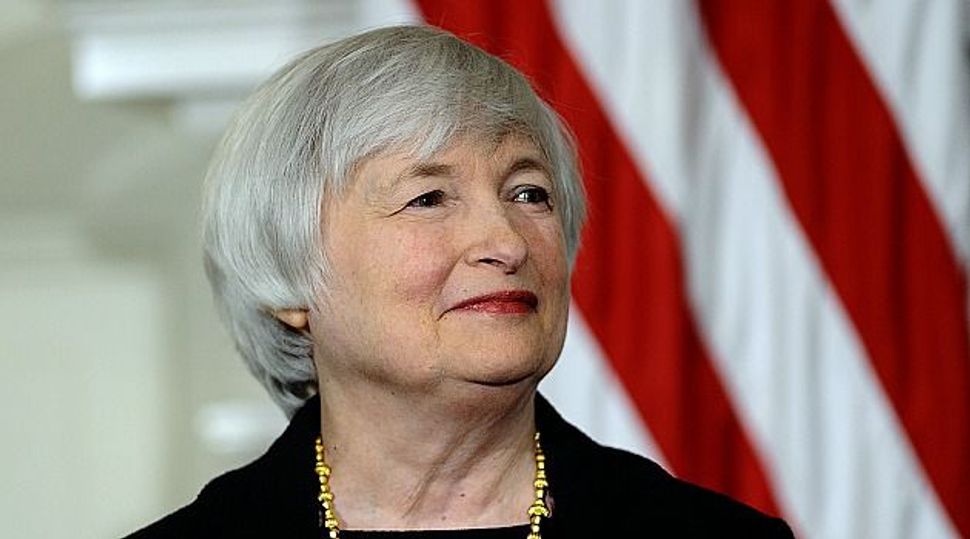 Banker-in-Chief: Janet Yellen is introduced by President Barack Obama as his pick to be the next Federal Reserve chief. Image by getty images

Janet Yellen, President Barack Obama’s pick to lead the Federal Reserve, combines a solid reputation as an economist with a keen interest in communication – fitting for someone who once joked that her dinner guests should expect a discussion of economics.

Yellen, a former professor who would be the first Jewish woman to hold the job, has a reputation as one of the central bank’s most employment-focused officials and has also been at the forefront of a communications “revolution” at the once-secretive Fed.

She has been a close ally of Chairman Ben Bernanke as he took the central bank further and further into unfamiliar terrain to boost the U.S. economy, backing three rounds of bond buying that have swelled the Fed’s balance sheet to about $3.7 trillion.

Obama announced on Wednesday that he would nominate Yellen to succeed Bernanke. If confirmed by the U.S. Senate, she would be the first woman to head the Fed in its 100-year history.

The white-haired Yellen played a big role in the Fed’s adoption of a 2 percent inflation target and its decision to treat undershooting and overshooting that target as equally problematic.

Like many Fed officials, Yellen, who counts hiking and cooking among her hobbies, believes ensuring that the public and financial markets understand the central bank’s plans is critical in making those policies effective.

“The effects of monetary policy depend critically on the public getting the message about what policy will do months or years in the future,” she told a journalists’ group in April.

The softly spoken 67-year-old is, by her own admission, willing to tolerate inflation overshooting the Fed’s 2 percent target when faced with uncomfortably high unemployment. “A wise and humane policy is occasionally to let inflation rise even when inflation is running above target,” she said in 1995.

In a speech last year, she argued the central bank can achieve the best economic outcome by allowing inflation to exceed the Fed’s target for several years to achieve a faster reduction in unemployment, as long as longer-term inflation expectations remain in check.

Yellen, who earned her doctorate in economics from Yale, was the daughter of a Brooklyn doctor who saw patients in the family home. Her mother was den mother to a troop of Cub Scouts.

Rich Rubin, a retired professor of medicine who was a classmate of Yellen’s for nine years, said that as a boy he frequently visited the “cozy” Yellen home. He recalled Yellen, quiet as usual, lingering around the fringes of the all-boys Cub Scout group as they discussed literature.

“I remember her mom talking about books with us. It was clear the family was a very cultured family,” Rubin said.

Charles Saydah, a retired journalist who went to junior high and Fort Hamilton High School with Yellen, said she was “a self-described nerd, nose to the grindstone.”

“We referred to her as a stealth intellect,” said Saydah. “She only called attention to herself when we compared marks – she always got the highest marks.”

Yellen decided to pursue a career in economics after hearing Nobel prize-winning economist James Tobin speak and being impressed by his combination of academic accomplishment and public service.

Her notes of Tobin’s lectures were so exhaustive that students passed them around as study guides.

That thoroughness has stayed. Yellen arrives at Fed meetings with carefully researched written remarks, delivering them in measured tones with a slight, somewhat nasal Brooklyn accent that nearly 30 years in California did not fully eradicate.

Yellen’s experience in policymaking is as solid as her career in academia, which included teaching at Harvard University and the London School of Economics as well as the University of California, Berkeley’s Haas School of Business.

She had two stints as a Fed policymaker before becoming vice chair, as a board member and as president of the San Francisco Federal Reserve Bank, and headed former president Bill Clinton’s Council of Economic Advisers for 2-1/2 years.

Yellen has written extensively about monetary policy, but she has also struck farther afield. One paper, written with her Nobel Prize-winning economist husband George Akerlof, analyzed single motherhood, arguing that a rise in out-of-wedlock births was due to a decline in “shotgun” weddings. That paper proposed forcing unwed fathers to pay child support.

Yellen met Akerlof when they were both at the Fed in Washington; their wedding was hasty, although only because Akerlof was moving to London and the couple wanted to stay together. Their only child – Robert Akerlof – teaches economics at the University of Warwick.

Yellen, whose love of gourmet food does not stop her frequenting the Fed’s staff cafeteria, joked in 1995 that dinner at her house meant “a diet that is richer in discussions of economics and policy issues than many people would find appetizing.”

DOVE FOR THE TIMES

While Yellen has a reputation as one of the Fed officials most willing to risk higher inflation to bring the jobless rate down, her track record offers a more nuanced picture of her approach to monetary policy.

In 1996, she and then-Fed Governor Laurence Meyer paid a visit to the central bank’s chairman, Alan Greenspan, to warn that leaving rates too low for too long could fan inflation.

Although the argument fell on deaf ears, “it tells you that she’s prepared to be hawkish when she needs to be,” Meyer said.

In 1995, she convinced the Fed board that targeting a low level of inflation would be better than aiming for no inflation at all and in 2012, she was instrumental in pushing the Fed to adopt a 2 percent inflation target.

“That was a very big step for the Fed, and it was managed mostly by Janet,” said former Fed Vice Chairman Alan Blinder. “She was fighting for years and years, going back to her first stint on the Fed, to adopt a 2 percent inflation target.”

Dallas Federal Reserve President Richard Fisher, who also backed an inflation target but is at the opposite end of the policy spectrum to Yellen, said in September that Yellen would make a great chair, even though her policy was “wrong” – showing she has backing even among Fed hawks.

Markets will be looking to Yellen for clearer communication about where Fed policy is heading, after the central bank’s failure to roll back stimulus at its September meeting caught many investors on the back foot.

At her first policy meeting as the Fed’s No. 2 official, Bernanke tapped Yellen to lead a push to fine-tune the central bank’s communications to ensure its policy messages got through.

It was not her first such assignment: in 2007, she helped revamp the Fed’s economic forecasts, making them a more frequent quarterly affair and extending their horizon to three years to improve their usefulness as guideposts on the likely policy path.

In late 2012, Yellen helped push the Fed’s guidance even further by backing a controversial idea to tie interest rates to certain economic thresholds. Specifically, the Fed vowed to hold rates near zero at least until the jobless rate fell to 6.5 percent as long as inflation did not exceed 2.5 percent.

That would allow investors to automatically adjust their rate hike expectations based on economic data, she argued.

Yellen has been credited with seeing the dangers of the housing bubble earlier than some of her colleagues, although her warnings came too late to shield the economy from its deepest recession since the Great Depression.

“In terms of risks to the outlook for growth, I still feel the presence of a 600-pound gorilla in the room, and that is the housing sector,” she said at a meeting in June 2007, warning there was a risk of further significant deterioration.

And yet Yellen underestimated the risks. In October 2007 she told her colleagues that she believed the Fed had “roughly neutralized the shock” from the collapse of the subprime mortgage market by cutting interest rates the month before.

The Great Recession began two months later, setting the stage for the Fed’s unprecedented bond-buying and increasingly detailed interest-rate guidance to return the economy to health.

With the labor market in slow-motion recovery, one of Yellen’s most critical and delicate tasks will be to guide the policy-setting Federal Open Market Committee as it tries to wean markets off the Fed’s bond-buying stimulus.

“I think I am as committed to price stability and the attainment of price stability as any member of the FOMC,” she said in March 2010. “When the time has come, am I going to support raising interest rates? You bet. I don’t want to see inflation pick up.”