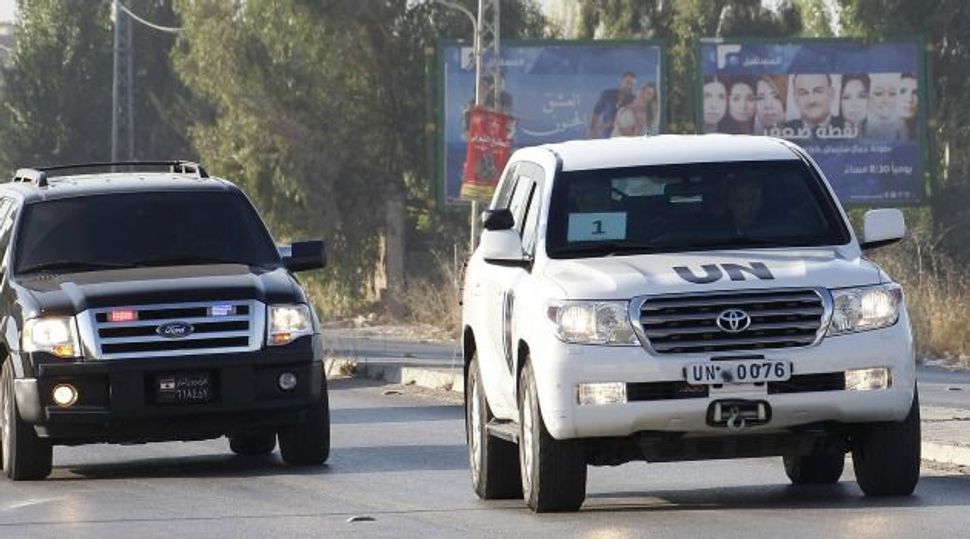 The Organisation for the Prohibition of Chemical Weapons (OPCW), a relatively small organisation with a modest budget, dispatched its experts after a sarin gas attack killed more than 1,400 people in August.

Their deployment, supported by the United Nations, helped avert a U.S. strike against President Bashar al-Assad.

Thorbjoern Jagland, the head of the Nobel Peace Prize committee, said the award was a reminder to nations with big stocks, such as the United States and Russia, to get rid of their own reserves “especially because they are demanding that others do the same, like Syria”.

“We now have the opportunity to get rid of an entire category of weapons of mass destruction…That would be a great event in history if we could achieve that,” he said.

The OPCW’s mission was unprecedented in taking place during a civil war that has riven the country and killed more than 100,000 people. Members of the Hague-based OPCW team came under sniper fire on Aug. 26, but OPCW head Ahmet Uzumcu said this week Syrian officials were cooperating in the process.

While the inspection and destruction of chemical weapons continues, with a team of 27 experts in the field, government forces and rebels press clash across the country with conventional weapons. Human Rights Watch said this week rebels had killed at least 190 civilians in Latakia province in August.

The award marks a return to the classical disarmament roots of the prize after some recent awards, such as to the European Union last year and U.S. President Barack Obama in 2009.

Those awards led to criticism that the committee was out of line with the spirit of the prize, founded by Swedish industrialist Alfred Nobel, the inventor of dynamite.

His 1895 will says the prize should go to one of three causes – “fraternity between nations”, the abolition or reduction of standing armies, and the formation and spreading of peace congresses.

The process of destroying chemical weapons can be hazardous and is costly. The chemicals can be burnt, but with care not to disperse poisonous toxins, or chemically neutralised.

“It has always been our position, that quintessentially we work for peace. Not just for peace, we work to strengthen humanitarian norms,” Malik Ellahi, political adviser to the OPCW director general, told Reuters.

“Chemical weapons are horrible things and they must never be used and that contributes not just to disarmament, but to strengthening the humanity within us.”

The Hague-based OPCW was set up in 1997 to implement a 1992 global Chemical Weapons Convention to banish chemical arms. It has about 500 staff and an annual budget under $100 million.

The United States and Russia had committed to destroying their arsenals by 2012 but have as yet failed to do so.

OPCW head Uzumcu told Norway’s NRK television: “I am sure…(the prize) will give encouragement to our staff to demonstrate more what they could do in terms of contributions to global peace and security.”

He said 80 percent of stockpiles under the oversight of the OPCW, excluding Syria, had already been disposed of.

“Still, 20 percent will have to be destroyed,” he said.

Chemical weapons can inflict considerable suffering and death, with choking, chemical burns and convulsions, and can be dispersed easily by winds and affect civilian populations. They were widely used in World War One. More recently, in 1998, 5,000 people were gassed to death by Iraqi leader Saddam Hussein in the town of Halabja.

The OPCW only appeared in speculation in the final hours before the prize. Pakistani teenager Malala Yousafzai, shot in the head a year ago by the Taliban, had been the bookmakers’ favourite to win the prize for her campaign for girls’ right to education.

President Vladimir Putin’s spokesman Dmitry Peskov said he had no comment on the award. But a senior lawmaker from the ruling United Russia party, Vyacheslav Nikonov, praised the decision and suggested some past awards, an apparent reference to the award to Obama, had been misguided.

“This is one of the best choices made by the Nobel Laureate committee in its history,” Nikonov said on state television.

“They didn’t want to make a mistake this time because there have been too many.”

The $1.25 million prize will be presented in Oslo on Dec. 10, the anniversary of Nobel’s death.

The OPCW, which has 189 member states, said Syria was cooperating and it could eliminate its chemical weapons by mid-2014, provided they received support from all sides in its civil war.

Chemical weapons experts believe Syria has roughly 1,000 tonnes of sarin, mustard and VX nerve gas, some of it stored as bulk raw chemicals and some of it already loaded onto missiles, warheads or rockets.

Under a Russian-U.S. deal struck last month, Syria must render useless all production facilities and weapons-filling equipment by November, a process begun over the past several weeks.