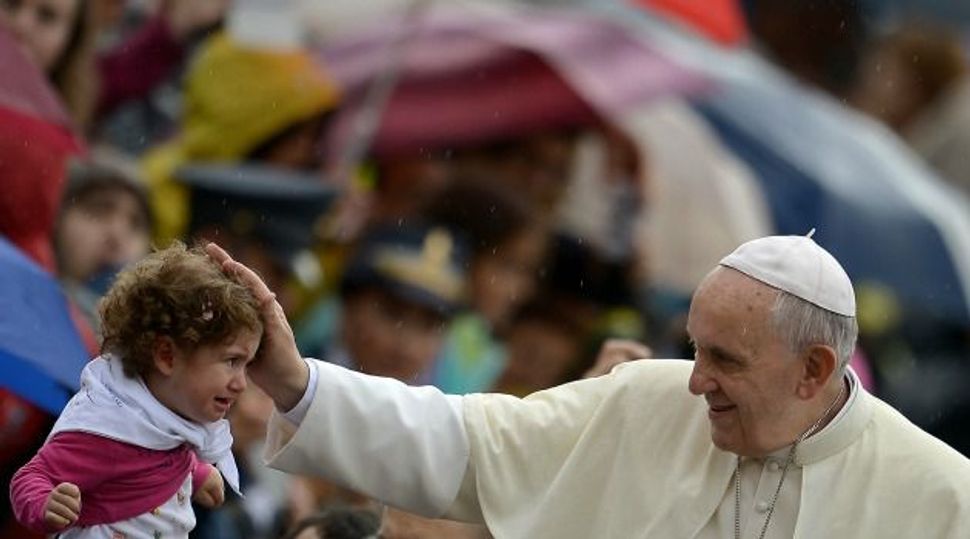 (JTA) — Pope Francis urged vigilance against any resurgence of anti-Semitism ahead of the 70th anniversary of the deportation of Rome’s Jews to Auschwitz.

The pontiff made the warning Friday during a meeting at the Vatican with Italian Jewish leaders, including Riccardo Di Segni, the chief rabbi of Rome.

Commemoration of the 1943 deportation, he said, “will also be an occasion to recall the importance of remaining vigilant in order that we do not regress, under any pretext, to any forms of intolerance and anti-Semitism, in Rome and in the rest of the world.”

Noting that Jews had lived in Rome for more than 2,000 years, the pope said that this history “as we well know” was “often marred by misunderstandings and real injustice.” However, he added, “by now this history includes, with the help of God, many decades of the development of friendly and brotherly relations.”

Francis also indirectly responded to criticism of wartime Pope Pius XII by noting that many Catholic religious institutions helped save Jews during the Holocaust. Critics say Pius turned a blind eye to the persecution of Jews during the Shoah.

The pope said he hoped to contribute “to that nearness and friendship” in the way that he had with the Jewish community in Buenos Aires, where he had been cardinal.

Francis also paid tribute to Christians who aided Jews during the Holocaust. “We know that many religious institutions, monasteries and indeed the Papal Basilicas, in accordance with the wishes of the Pope, opened their doors to provide a fraternal welcome, and that Christians offered the assistance, great or small, that they were able to give.”