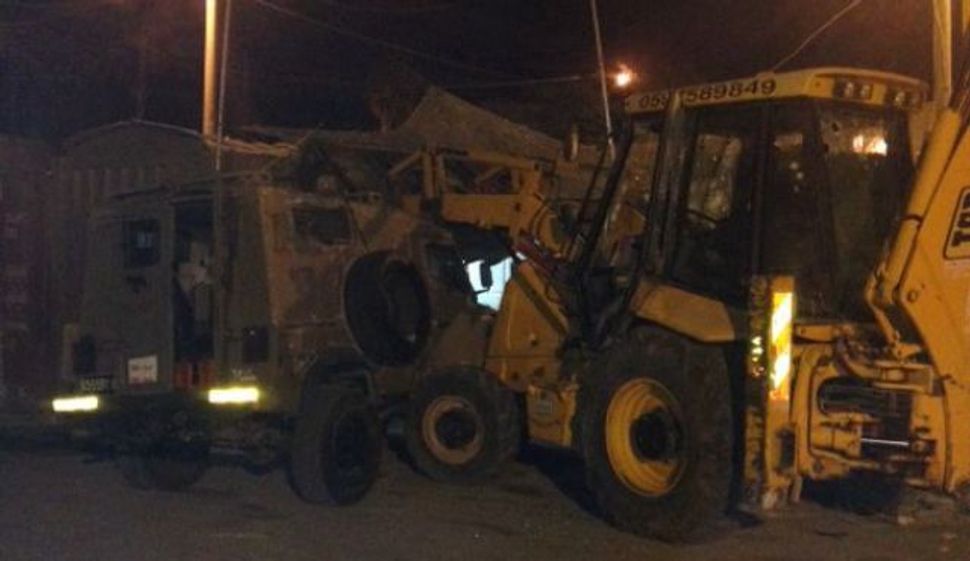 Reckless Driving: IDF Spokesperson released a picture of the bulldozer used in the attack on the A-Ram army base. Image by Haaretz

A Palestinian was killed by the Israel Defense Forces Thursday evening after smashing through the perimeter fence of the A-Ram army base driving a bulldozer.

When soldiers stationed at the entrance to the base, located near the West Bank town of Qalandiyah, spotted the intruder, they began the standard procedure for arresting a suspect. But when the man refused to stop, they opened fire, killing him.

One soldier was lightly wounded by a piece of the shattered fence.

The Judea and Samaria Division termed the incident an attempted terror attack, the latest of several such attacks in recent weeks. Last week, for instance, Col. (res.) Seraiah Ofer was murdered outside his Jordan Valley home. Two Palestinians from the Hebron area were arrested for the murder by the Shin Bet security service this week, and they have confessed to the crime.

A few days earlier, a 9-year-old girl from the settlement of Psagot was lightly wounded by Palestinian gunfire while standing on the balcony of her house.