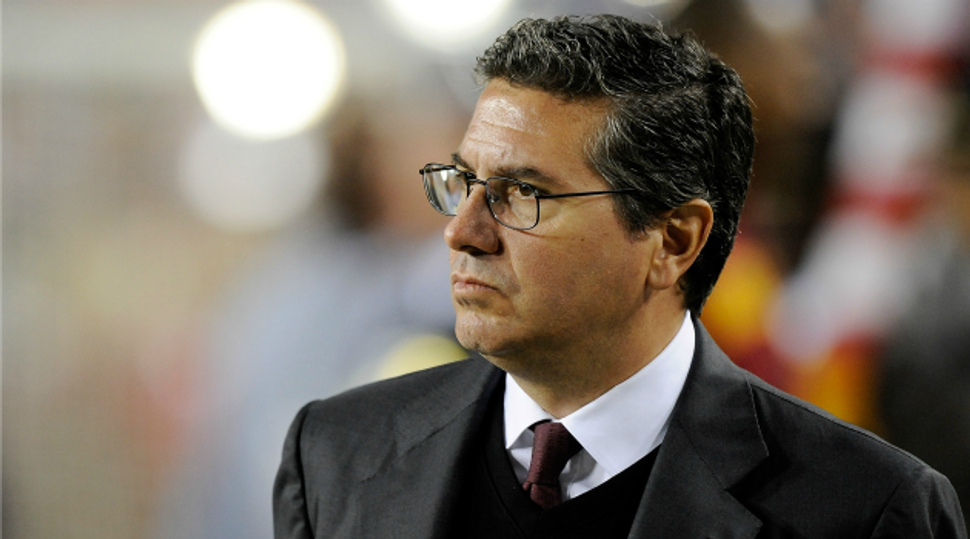 (JTA) — Last week, the Anti-Defamation League joined a number of groups and politicians urging the Washington Redskins to change their team’s name, already.

Here’s another Jewish wrinkle: The Onion posted an article on Monday that uses two anti-Jewish slurs (one twice) and two adjectival stereotypes to describe Redskins owner Dan Snyder and skewer his insistence that his team’s name is respectful of Native Americans. (There is a precedent for roping anti-Semitism into a Redskins controversy — Snyder himself claimed in 2011 that a childish caricature of him in a local paper was anti-Semitic.)

One Jewish Twittter user asked her friends to weigh in on whether the Onion crossed a line.

Jewish tweeps: does this Onion piece go too far or is it a pointed punch to the gut Dan Snyder deserves? http://t.co/kSUZ505WFn

The tweeter, Danielle, or @DCPlod, was offended at first, and then got the joke.

Hey Onion, I’m sure the Jews who support changing the Redskins’ name too will love you calling Snyder a kike. http://t.co/kSUZ505WFn

OK, my initial reaction was WTF but on reflection, that Onion piece on Snyder makes a point brutally well. @neurocat

The ADL is not the first national Jewish group to call for a Redskins name change. The Religious Action Center of Reform Judaism wrote to Snyder in 2000 urging him to do so. That letter cited a 1992 resolution by the Reform movement’s Central Conference of American Rabbis that condemned stereotypical team names and specifically urging the Redskins to change their name. The issue of Native American team names is not just a D.C. issue; the Milwaukee Jewish Community Relations Council and the Wisconsin Jewish Conference, a statewide umbrella body, this month led a coalition of groups opposing a bill that would make more difficult for public schools to change ethnically charged team names.