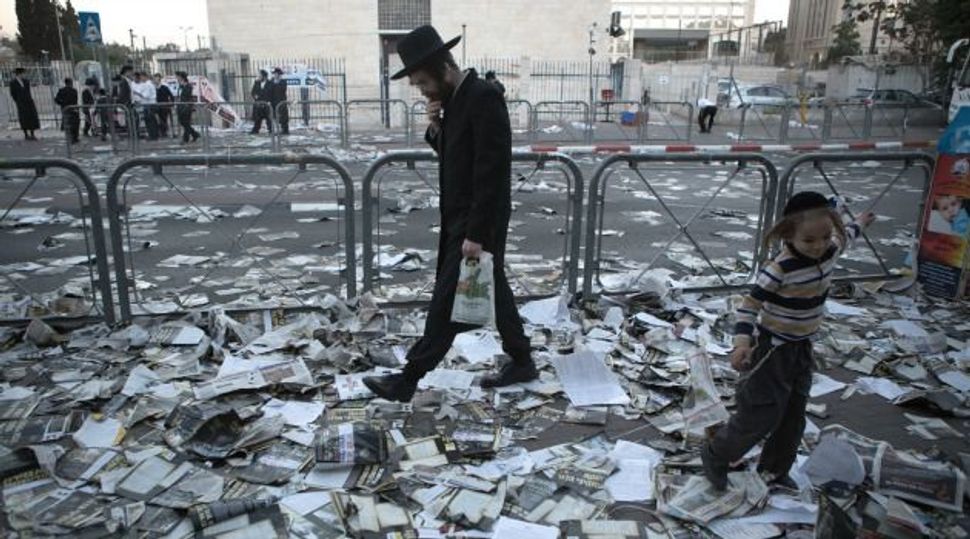 Change Is Coming: An ultra-Orthodox man walks past discarded election pamphlets in Jerusalem. A small but growing number of Haredi Jews are seeking to enter modern life by getting jobs and even joining the military. Some women are even running for offfice. Image by getty images

Better trained in wrestling with complex religious texts than in martial arts, the ultra-Orthodox Jewish youths drop to the floor to give their combat instructor a dozen push-ups.

Black skullcaps slip off their heads and a pair of glasses goes flying across the room as the khaki-clad trainer barks out: “I will kick your ass if you do not keep time.”

The 15 young men have chosen to go against the norm of their reclusive community. They are training for military service, a two-to-three-year obligation that binds most Israelis, but from which the ultra-Orthodox, or Haredim, are mostly exempt.

Not 10 minutes drive away, posters in Jerusalem’s ultra-Orthodox neighbourhoods scorn Haredi men who choose to serve in the army and quote rabbis who rule against the practice they fear will lead their youth away from piety and into bad ways.

But there are those who swim against the stream, many of them seeking a way out of financial hardship. According to the Israeli military, there are increasing numbers of ultra-Orthodox soldiers in its ranks today.

“Army is an essential stage for the rest of my life, you go through a lot there, you leave there ready for life,” said Michael Iluz, one of the youths taking part in the private programme meant to prepare him for military life.

From childhood, ultra-Orthodox men are schooled almost exclusively in religious studies, many at adulthood choosing full-time study over working. Their traditionally large families rely on state benefits, stipends and their wives’ wages.

As such, Haredim, who make up about 10 percent of Israel’s eight million population, are viewed by many in Israel as an economic burden.

Adhering to a strict religious lifestyle, Haredim – Hebrew for “those who fear God” – mostly live in their own towns and neighbourhoods, keep to their own schools and shun secular culture. Men wear traditional black garb and women cover up.

But there are signs of a growing, dispersed movement driving change inside the cloistered, and also poor, community.

Eighteen-year-old Iluz had been on the traditional Haredi track, studying Torah for about 10 hours a day. But he felt he was unsuited for the intensive scholarly regimen and though dropping out of a yeshiva, or seminary, is very much frowned upon, he decided to leave.

Religious scholars are revered in Haredi culture, which sees the study of Torah and Talmud as a sacred task, meant to keep alive centuries of knowledge and tradition almost wiped out in the Holocaust.

Iluz now studies computer programming at a Jerusalem college, and when he enlists he hopes to serve in one of the military’s computer units.

“I want to prepare myself for a profession now, to be able to support my family,” he said. “There is no reason for my community to see me in a lesser light, I am not doing less with my life than a seminary student.”

Iluz is not alone. The number of Haredim getting job training at specialised centres and studying at academic institutes has been steadily rising, giving graduates a better chance of finding a job and increasing their earning power.

According to Israel’s Council for Higher Education, some 7,000 Haredim were engaged in academic studies in 2012, up from 5,600 students in 2010, with business administration, law and social sciences drawing the majority.

The number is projected to rise further in 2013.

Army statistics show the number of Haredim in military service growing steadily over the past few years. In 2008 there were 387 Haredi soldiers. To date there are about 3,500, nearly 10 times as many, ultra-Orthodox soldiers.

The number of Haredim who enter national service in civil capacities has also risen between 2010-2012, according to Israel’s Administration for National-Civic Service.

Facing public pressure, the government has been grappling for months with the task of writing a new military draft bill that would slash the seminary student exemptions. The law is expected to be brought to parliament in the coming months.

Haredim who choose to enter military or civic service often do so with the knowledge it will eventually boost their chances of earning a decent salary.

In May, an Economy Ministry report found that found 70 percent of Haredim who served in the army had found jobs after completing service. By contrast, only 45 percent of all Haredi men are employed, according to the Central Bank of Israel.

Hayim is a 23-year-old Haredi man whose wife is a social worker. He studies computer programming in the evenings and during the day does computer work at a government office as part of his national civic service.

“There are those who mentally cannot study at yeshiva all day and those who cannot afford to do so financially. We just can’t live off 5,000 Shekels ($1,430) a month,” said Hayim, who did not want to give his family name.

Though attitudes among Haredim towards working and higher education were changing, Hayim said, “I would prefer my son grow up to be a Torah genius rather than a Bill Gates.”

Nissim Leon of Bar-Ilan University’s Department of Sociology and Anthropology said there were several reasons for the Haredi push into academia, professional training and the military.

The global financial crisis has cut overseas donations to Haredi institutions, Leon said, and the Israeli government has tightened the purse strings when it comes to the Haredim.

“There is also the Israeli consumer culture, which the poverty-stricken Haredim can see, and they are choosing to study practical professions that increase the family unit’s consumption ability,” Leon said.

But for some, change can come at a price.

“Haredi society has many tools to enforce its norms,” said Racheli Ibenboim, a Haredi mother of two who chose an unusual path for an ultra-Orthodox woman when she decided to run for public office in Jerusalem’s Oct. 22 municipal election.

As a rule, Ultra-Orthodox women are excluded from politics. Ibenboim, who describes her Haredi sect as particularly strict, said her family was threatened with ostracism.

She said an anonymous phone call was made to her husband’s workplace saying he could no longer be employed there unless she pulled out of the race. He was told by members of their Hassidic community that he would no longer be allowed into synagogue and that their children would face expulsion from school.

“There are two clashing processes in the Haredi society today, one toward radicalisation and one toward integration and it is too early to say which will win,” Ibenboim said. “There are many more social activists today calling for change. Poverty and hardship are pushing people toward change.”

Ibenboim eventually chose to quit the race, saying she wanted to stay in her community and promote change from within. But the municipal election has presented another arena where change among Haredim can be seen.

“This is new. Haredi women do not go into politics. There is objection to women in public office,” said Michal Zernowitski, 33, who headed the list.

“The Haredi street is ready, but when it comes to the institutions and to Haredi media, then there is a lot of opposition,” Zernowitski said. “It may take two, or three or even 15 years. When you make a change you start on your own.”