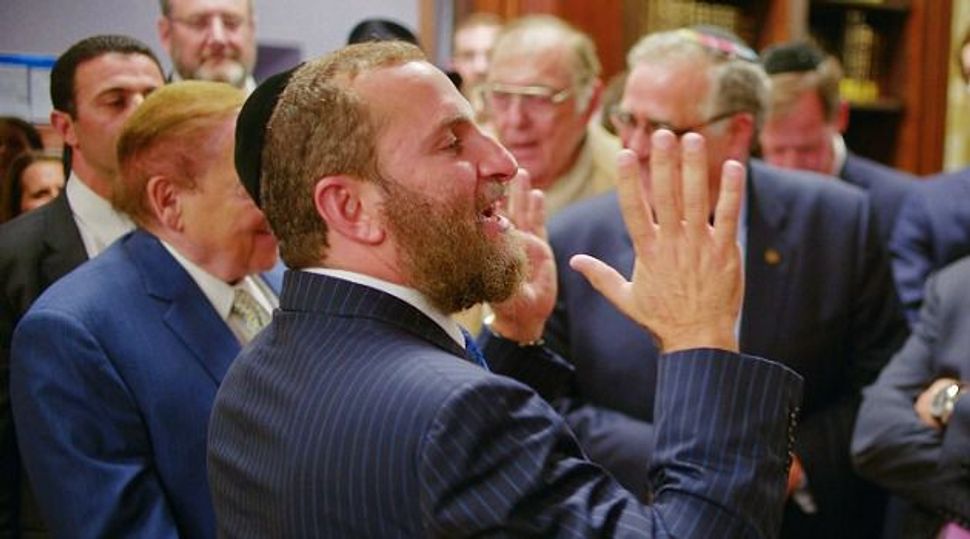 Sheldon and Shmuley: Shmuley Boteach speaks alongside Sheldon Adelson at a Yeshiva University panel. The rabbi defended the casino mogul for saying the U.S. should attack Iran with nuclear weapons. Image by Courtesy of This World

Sheldon Adelson admitted calling for the U.S. to carry out a nuclear strike on Iran, but insisted he was using “hyperbole” to point out that harsher action should be taken against the Islamic republic.

Adelson made the controversial comment during a panel discussion at Yeshiva University entitled ‘Will Jews Exist? Iran, Assimilation, and the Threat to Israel and Jewish Survival.’ Also on the panel were Yeshiva President Richard Joel and Bret Stephens, an editor at the Wall Street Journal.

The panel moderator, author and politician Shmuley Boteach, defended Adelson. He called the nuclear attack remark “innocuous” and suggested reporters should have focused on Adelson’s point that Israel is in serious danger from what he called Iran’s nuclear threat.

“Those who seem alarmed by Sheldon’s overstatement on the extent to which the United States should go to stop Iran from acquiring a nuclear weapon will at least protest that much more loudly against its actual development,” Boteach said in a press release, referring to Iran’s nuclear program.

Adelson, an arch conservative who has poured tens of millions of dollars into Republican political campaigns, also trashed the Israeli-Palestinian peace process and called the two-state solution “Russian roulette.” He denied the existence of a Palestinian people, calling them “south Syrians,” and said he does not know the difference between Sunni and Shia Muslims, groups which together comprise about 20% of the world’s population.

He also said that he hoped in a future life to be a Chinese man because they are the “boss” of their households.

Boteach did not address Adelson’s remarks on the peace process or his professed ignorance about Islam.