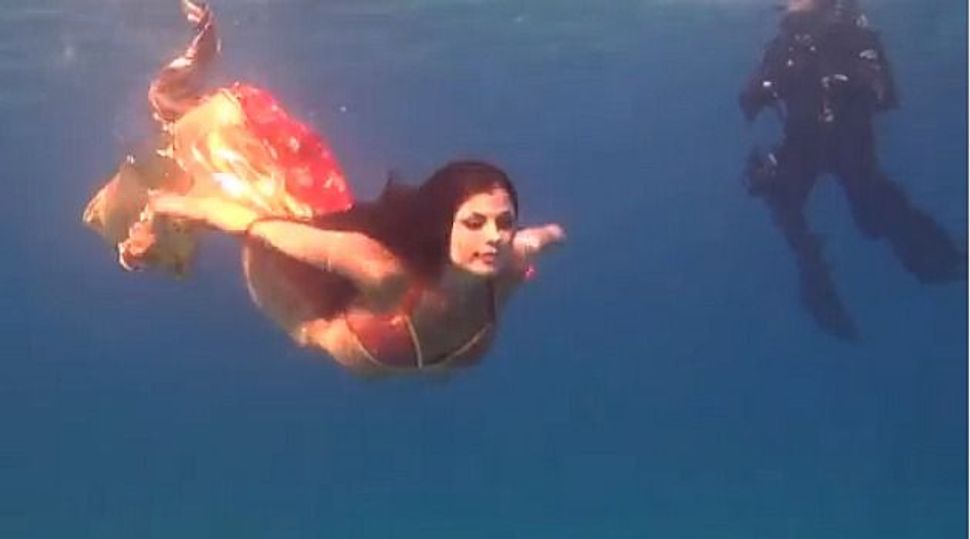 A gust of air ruffled her white wedding dress before Hagar Cohen dived into the Red Sea, high heels sparkling in the sun as she disappeared beneath the waves.

Minutes later the 33-year-old Israeli diving instructor, moonlighting as a model, was posing on a sunken missile ship 20 m (60 feet) below the surface of the Gulf of Eilat – for an underwater photo competition.

Italian photographer Giordano Cipriani shot Cohen for about 30 minutes, directing her in sign language as the wedding gown floated freely about her as it never would on land.

Cipriani’s wet-suited mother was on hand to administer gulps of air from her scuba tank to Cohen so she wouldn’t expire.

The shipwreck was a popular location at this year’s Eilat Red Sea World of Underwater Images, where about 80 amateur and professional photographers competed in what they say is the world’s biggest underwater photo “shootout”.

Most photographers combed the seabed day and night for exotic aquatic life. A handful entered the “Fish and Fashion” category, in which the “photographer can make use of nudity, fashion and styling elements upon his choice”.

Underwater photography, for most, is an expensive hobby. A camera with a waterproof casing can be bought for several hundred dollars. But high-end systems, with multiple lenses and flashes extending out like crab’s legs, cost up to $40,000. And that does not include the scuba gear.

“When I first decided to take it to the next level, I had to sell my motorcycle to buy the equipment,” said Cipriani, 39, who works as a travel photographer.

It was his first time at the Eilat event, where the first place prize of $10,000 is pretty much as good as it gets.

“But even a win can cost them money,” said David Pilosof, who has been running the competition for eight years. The cost of equipment and travel all adds up. “They come because they have been bitten by a bug. It is a passion.”

Pictures can be in colour or black-and-white but none can be edited even slightly without incurring disqualification.

Zimbabwe-born Richard Carey has competed for several years and in 2010 won a prize with a picture of two octopi mating.

“There is still the excitement, the adrenalin, the moment you see something special, and you just hope you can get your camera there in time,” he said.

Eilat does not appear in most top-10 lists of must-dive locations in the world, but it is still popular, largely due to its variety of fish and the easy access to its reefs.

Its corals are special for another reason. They can, unlike many others that are turning white and dying, tolerate unusually large rises in temperature, a study published last month found.

The corals that settled thousands of years ago in the northern Red Sea had to pass through a narrow strait to the south that acted as a thermal barrier, ensuring they are more resistant to temperature increases.

“It’s a coral refuge,” said Amatzia Genin, a professor of ecology at the Hebrew University of Jerusalem, who co-published the findings in the journal Global Change Biology. Corals in this area could live for 100 years after others die, he said.

Israeli photographer Johannes Felten said the coral was the perfect background for fashion shoots. He wanted as much help as possible on land – he brought a model and stylist – because underwater currents are disruptive and lighting is elusive.

Also there is the cold. His model wore only a skirt and bikini top.

Felten said he did not care that his equipment cost far more than the winning purse.

“You can’t put a price tag on a hobby like this, on a passion,” he said.