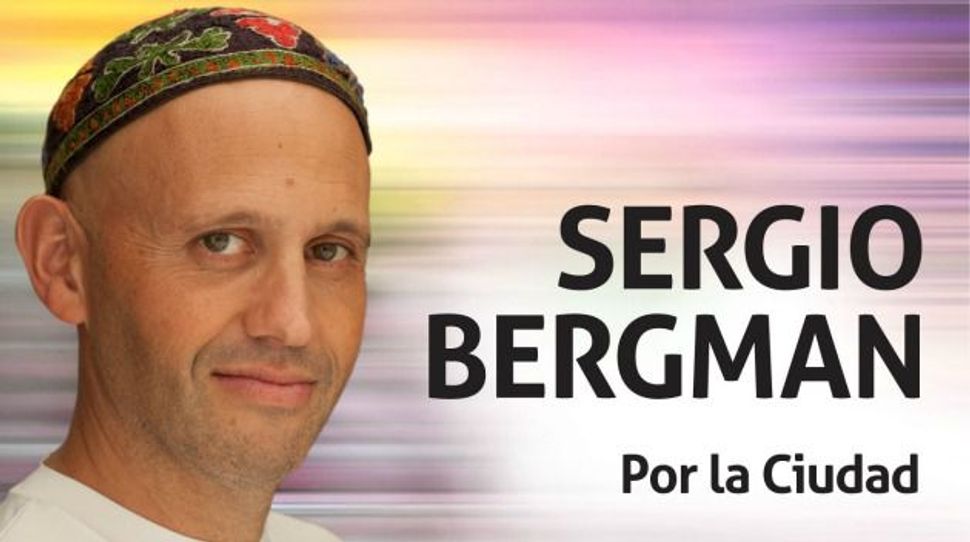 (JTA) — When he takes the oath of office in December as a new member of Argentina’s lower house of parliament, Rabbi Sergio Bergman will eschew the Christian Bible used by other legislators in favor of the Five Books of Moses.

Bergman, whose PRO party won 34.5 percent of the vote in parliamentary elections on Sunday, is believed to be the only rabbi elected to a national parliament outside Israel.

PRO, which Bergman leads, edged the runner-up UNEN party, which captured just over 32 percent, making Bergman the first Argentine rabbi to win a seat as a national lawmaker.

Trained in biochemistry and pharmacology, Bergman abandoned a career with the German pharmaceutical giant Boehringer Ingelheim for the rabbinate at the urging of his wife, Gabriela.

“Let’s follow your vocation,” he said she advised him. “If then you find that rabbinical work doesn’t fit, you can return to your profession as a pharmacist. But I don’t want to see you in your 40s unhappy with your life.”

Now 51, Bergman has four children, is the author of five books and is recognized internationally. He founded a network of Jewish schools and educational projects that includes a gay alliance and a rural farm. In May he received the Micah Award from the World Union for Progressive Judaism for his commitment to social justice at the organization’s convention in Jerusalem.

But he is also recognized beyond the Jewish community as a leading thinker on the issues of spirituality and interfaith activism.

Rabbi Sergio Bergman campaigning for the PRO party, which came in first in Argentine elections Sunday. Pope Francis, then Buenos Aires Archbishop Cardinal Jorge Bergoglio, wrote in a prologue to Bergman’s 2008 book “Argentina Ciudadana,” or “Argentina Citizen,” that the rabbi uses the Bible “as an inspiration to build a basis of our civic behavior and elaborates the fundamentals of a civil spirituality.” Bergman launched his political career in 2011, when he was tapped by Buenos Aires Mayor Mauricio Macri to lead his PRO party’s list for the municipal legislature. Among 10 parties, Bergman’s was the leading vote getter, tripling the vote total of the second-place finisher. As a legislator, Bergman employed unorthodox methods to reduce tensions in the city, organizing a day of meditation for legislative employees and installing a popcorn machine in his office. “The struggles and also some projects are funnier than some movies,” he said. Throughout his political career, Bergman has not hid his Jewishness. Indeed, he has celebrated it, wearing his colorful yarmulke at his public appearances. At a recent campaign rally, his speech was full of biblical allusions, saying citizens needed to join together in “building the holy land of the city of Buenos Aires in order to develop the promised land of Argentina.” In the 2011 election, he wanted to be listed on the ballot as “Rabbi Sergio Bergman.” Opponents challenged the bid, and a court ruled eventually that while Bergman might be well-known as a rabbi, his title suggests positive connotations that are inappropriate for an election ballot. In a country only three decades removed from dictatorship, the acknowledgment was seen as a democratic advance. Argentina is “in a deep crisis of values,” Bergman told JTA. “I believe that Torah can also be taught in the legislature. I’m against the union of state and religion. I’m in favor of the separation of church and state, but also in favor of putting deep values in politics.” The juxtaposition has a notable history in Argentina. Rabbi Marshal Meyer, an American who lived in Buenos Aires from 1958 to 1984 and founded the Conservative rabbinical seminary here, was famous for saying that a religious person can handle the Torah in one hand and a newspaper in the other. Meyer spoke openly about Argentina’s social problems and fought for human rights against the dictatorship that ruled the country from 1976 to 1983. A disciple of Meyer, Mario Rojzman, was the first Argentine rabbi to attempt a political career. In 1997, Rojzman sought to be a congressional candidate with the Nueva Dirigencia party, but fierce criticism persuaded him to abandon the effort. “I have in mind that Rabbi Mario Rojzman also tried to create a political space with non-Jewish sectors 10 years ago, but he was criticized so much,” Bergman said. “That was a matter of timing. Maybe he was ahead of his time.” Bergman dismisses concerns about embracing such a high public profile in a Jewish community that still lives in the shadow of the 1994 bombing of the AMIA Jewish center that killed 84 and injured hundreds. “I’m not worried about prejudices; in fact non-Jews love me more than Jews,” Bergman told JTA. “If the society knows us better, the level of anti-Semitism will become lower. I’m not sure that this is the right idea, but I’m sure that this is my objective. “What I can guarantee is that I can be criticized for many things, but not for being a rabbi. I receive criticisms that I’m on the right or that I ask for law and order, but nobody criticizes me for being Jewish. If I am attacked for being a rabbi, the first to come out to defend me are the non-Jews.”

A fellow alumnus of the Latin American Rabbinical Seminary, Daniel Fainstein, says much has changed since Argentina restored democracy in 1983, and Jews are now much more visible in the public arena.

“For some people, this situation can potentially increase anti-Semitism through the high visibility of a political figure who is a rabbi,” Fainstein said. “For others, it’s a symbol of the full integration of the Jews in the national society.

“On the other hand, as a committed citizen, Rabbi Bergman has the right to be active in the political contest, choosing the political party he likes.”

Bergman lives in the middle-class Belgrano neighborhood, where the seminary and most of the city’s Conservative congregations are located.

At one time he was a member of two rabbinical organizations — the Conservative movement’s Rabbinical Assembly and the Reform Central Conference of American Rabbis. But in 2012, he resigned from the Rabbinical Assembly, citing his failure to get rabbis from both movements to work together.

Bergman has an active presence online, with more than 65,000 followers on Facebook and more than 35,000 on Twitter. According to his most recent financial disclosure, his personal wealth amounts to approximately $500,000.

Analysts say Bergman’s political future is linked to the fate of his patron Macri, who has announced he will run for president in 2015. If Macri wins, there is speculation that Bergman could be given any number of plum positions, from minister of education to mayor of Buenos Aires.

But in the short term, Bergman’s success hinges on the success of an initiative he is championing as a legislator: the rollback of Argentina’s agreement to cooperate with Iran in investigating the 1994 AMIA bombing and the impeachment of the country’s Jewish foreign minister, Hector Timmerman, who negotiated it.