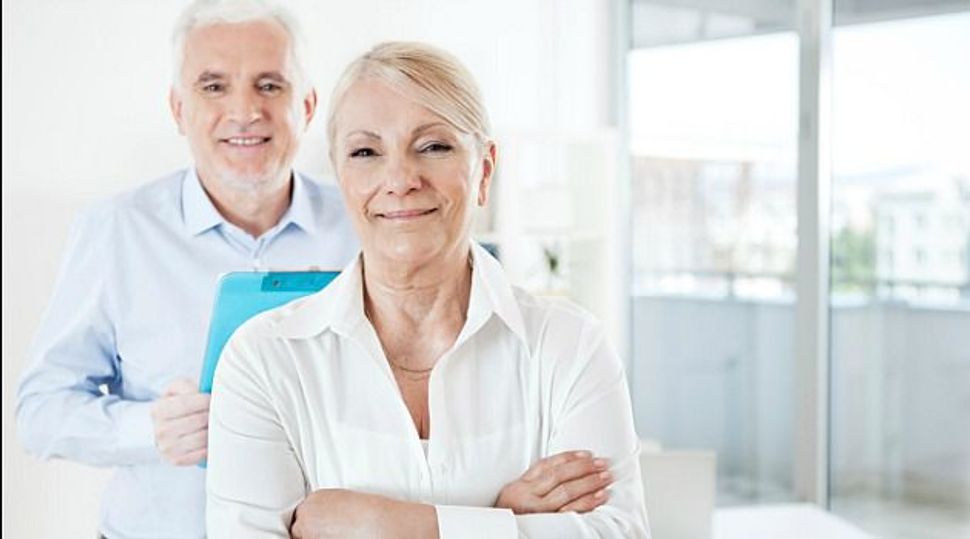 (JTA) — American Jewish women are giving birth later than other women, sometimes delaying childbearing into their late 30s or even 40s.

The much-discussed Pew Research Center survey of American Jews released this month found that Jews aged 40 to 59 have an average of 1.9 children, compared to 2.2 children per adult among the same-age cohort of the general public. According to the most recent National Jewish Population Survey, in 2000, Jewish women are substantially more likely to remain childless into their 30s and 40s than American women generally.

“The fertility gap between Jewish and all U.S. women narrows but is not eliminated in later childbearing age groups, indicating that Jewish women delay having children until later years, and then come close to, but do not match, fertility levels of all U.S. women,” the NJPS reported.

So how late can a woman get pregnant?

According to Lawrence Grunfeld, a reproductive endocrinologist and professor at the Mount Sinai School of Medicine in New York, recent studies by the American Society of Reproductive Medicine show that with donor eggs and a healthy mother, pregnancies can be viable through age 55.

But that doesn’t mean it’s easy. Pregnancy and childbirth after 35 — what doctors term “advanced maternal age” — can present a number of complications, foremost among them the difficulty of conception. After age 35, fertility in women decreases precipitously.

“That means that the ovaries are producing fewer eggs. Women are born with a set number of eggs, and we have the most eggs we’ll ever have before we’re born. After a certain age, reserves are much lower.”

The two most common ways to aid conception in older women are ovulation induction, in which hormone injections promote the production of eggs, and in-vitro fertilization (IVF), in which eggs are extracted from the body, inseminated with the sperm and used to create embryos that later are implanted in the patient.

Although IVF has been around since 1978, its effectiveness has improved rapidly as its use has expanded across the country. As of 2011, about 12 percent of women of childbearing age in the United States had used a fertility service, according to the Centers for Disease Control.

Beyond the challenges of conception, late pregnancy carries additional risks. Decreased quality of eggs in women older than 40 can increase the risk of miscarriage and the likelihood of chromosomal abnormalities such as Down syndrome.

One solution is using donor eggs, a procedure commonly recommended for women in their 40s struggling to become pregnant. This approach presents problems for observant Jews concerned that the child may be regarded as a mamzer, an “illegitimate” child subject to severe ritual restrictions under Jewish law.

“To overcome that, most of the current rabbis feel that if you’re going to do egg donation, use an unmarried Jewish girl, and that voids the concern about the boy being a mamzer,” Grunfeld said.

For women who want to use their own eggs, growing numbers are turning to vitrification, a technology that allows women to freeze their eggs while they are still viable and implant them later in life. Gila Leiter, an associate professor of obstetrics at Mount Sinai Hospital, told JTA that freezing eggs for later use has become more common among patients in their late 30s as the process has improved radically in the last few years.

“For women in their 30s, vitrification really takes the pressure off,” Leiter said. “Many women have come to me and expressed relief, saying that they are able to approach dating without the same fear of the ticking clock.”

Concerns about increased risk for genetic abnormalities also are addressed through new technologies that screen embryos prior to implantation. Ressler told JTA that the risks of miscarriage are greatly reduced by subjecting embryos to a biopsy before they are transferred to the uterus.

Pre-implantation screening offers distinct advantages over other screening methods like amniocentesis and CVS, or chorionic villus sampling, which are conducted at later points in gestation and entail greater risk of miscarriage.

The manifold concerns of late childbearing extend beyond conception. Once pregnant, would-be mothers over 35 face higher rates of diabetes, hypertension and preeclampsia, a life-threatening condition that causes high blood pressure and organ damage in expectant mothers.

Vigilant observation can mitigate some of the concerns. Weekly maternal stress tests that monitor heart rate, placental blood flow and other factors are recommended for pregnant women in their 40s. Such monitoring can be time consuming and stressful, but it can also be vital.

For Amanda Stein, who recently gave birth to her first child at 47, maternal stress tests proved life-saving. When she was 39 weeks pregnant with her son, Caleb, a test revealed that the baby’s heart rate was falling. During contractions, the umbilical cord had wrapped around his neck.

“That monitoring enabled him to get there safely, one month and one day ago,” Stein said. “The amount of support, and the gifts and the notes and the visitors, has just been astronomical. And I think that part of that is that people recognize what a miracle this is.”