On Eve of Kristallnacht Anniversary, Merkel Calls for Stand on Anti-Semitism 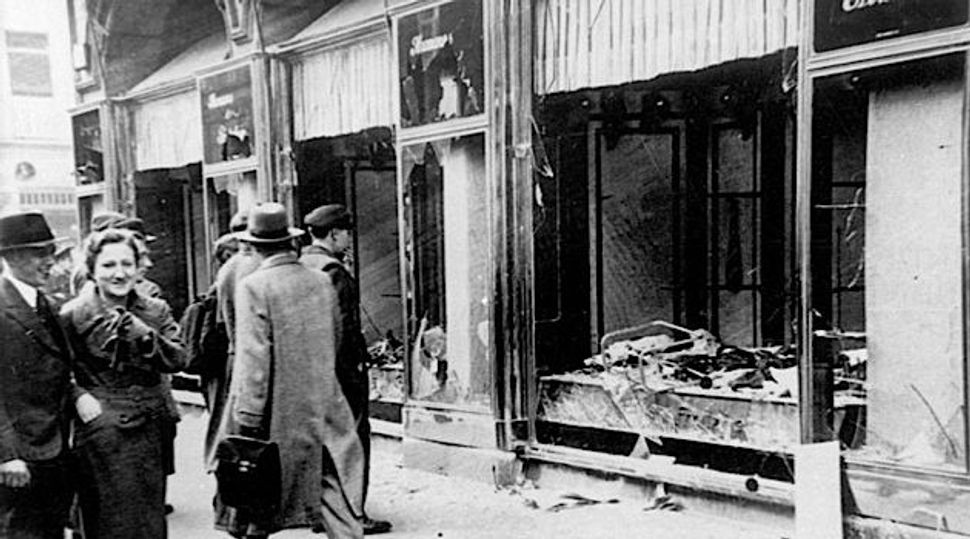 The people of Germany need “civil courage” to stand up against anti-Semitism, German Chancellor Angela Merkel said on the eve of Kristallnacht’s 75th anniversary.

Merkel, speaking on her weekly podcast with 17-year-old Jewish student Samuel Vingron, also said the fact that Jewish institutions still need police protection is a sobering reality 75 years after the pogrom known as the “Night of Broken Glass.”

The remarks broadcast on her website this weekend precede the anniversary of the pogrom, which will be marked in ceremonies throughout Germany.

In Berlin, in addition to the Jewish community’s annual ceremony, some 100 businesses will put stickers on their windows to symbolize the broken glass when Nazis rampaged homes, businesses and synagogues on the nights of Nov. 9-10, 1938.

More than 1,000 synagogues were destroyed, nearly 100 Jews were murdered and tens of thousands of Jewish men were deported to concentration camps. The government held Jews financially liable for the damages and confiscated insurance payments.

Dieter Graumann, president of the Central Council of Jews in Germany, will address some 200 members of the Conference of European Rabbis on Nov. 10, in a synagogue that escaped destruction and is now part of the Rabbinerseminar zu Berlin.

Rabbi Noam Marans, the American Jewish Committee’s director of interreligious and intergroup relations, will address a commemoration organized by the Action Reconciliation Service for Peace.

In Weimar, American expatriate musician Alan Bern is coordinating a sound installation that will include the ringing of hand bells at former Jewish homes and businesses; citizens will then broadcast the music of once-banned composers from their doors and windows. Also, church bells will be rung across the city.

“The city should be flooded with the sounds of bells and once-forbidden music, bearing witness to what happened in 1938 but also celebrating the freedom we have today,” Bern said.

On Eve of Kristallnacht Anniversary, Merkel Calls for Stand on Anti-Semitism