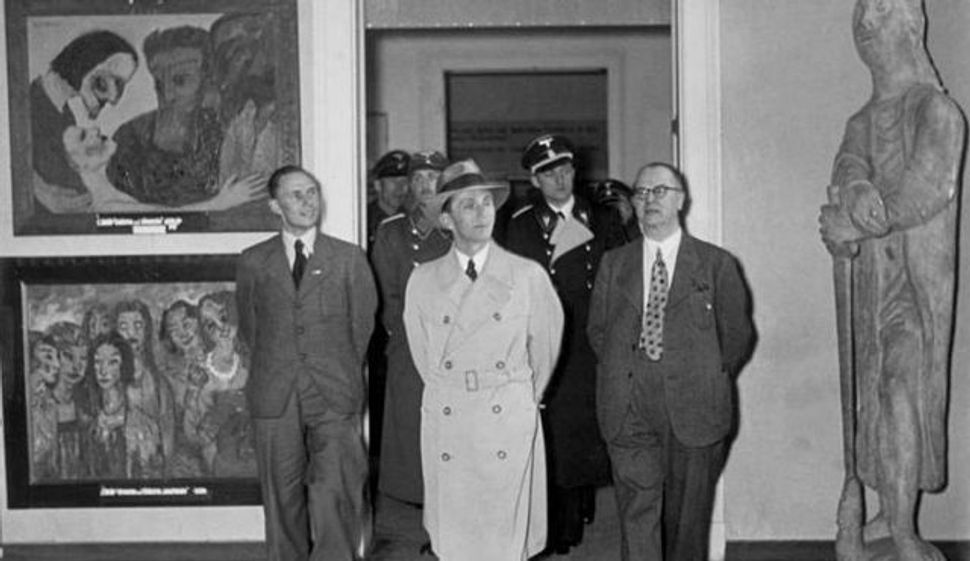 Goebbels views the ?Degenerate Art? exhibition in Berlin in 1937. Image by Wikicommons

Works by several of the greatest artists of the modern age have been held at a secret location near Munich for the past two years, after having been discovered in a raid by the German authorities on the apartment of an elderly man accused of tax fraud.

The 1,500 pieces include works by Picasso, Matisse, Chagall and Klee. According to the German magazine, Focus, which broke the story, their total value is in the region of 1 billion Euros.

The works are believed to have belonged to Jewish collectors and considered “degenerate” before World War II and to have been confiscated by the Nazis. Many were considered lost until now. They were purchased during the 1930s and 1940s by the German art dealer Hildebrandt Gurlitt, who was an associate of the Nazi leadership.

Gurlitt’s son Cornelius, 80, kept them for half a century in a dark room in his apartment, following his father’s death in 1956. He is believed to have sold off some of the works to support himself.

Cornelius Gurlitt was stopped during a routine check by the tax authorities in 2010, while returning to Munich from Switzerland. The check led to the launch of an investigation for tax evasion and a search of Gurlitt’s home in 2011, during which the works were discovered.