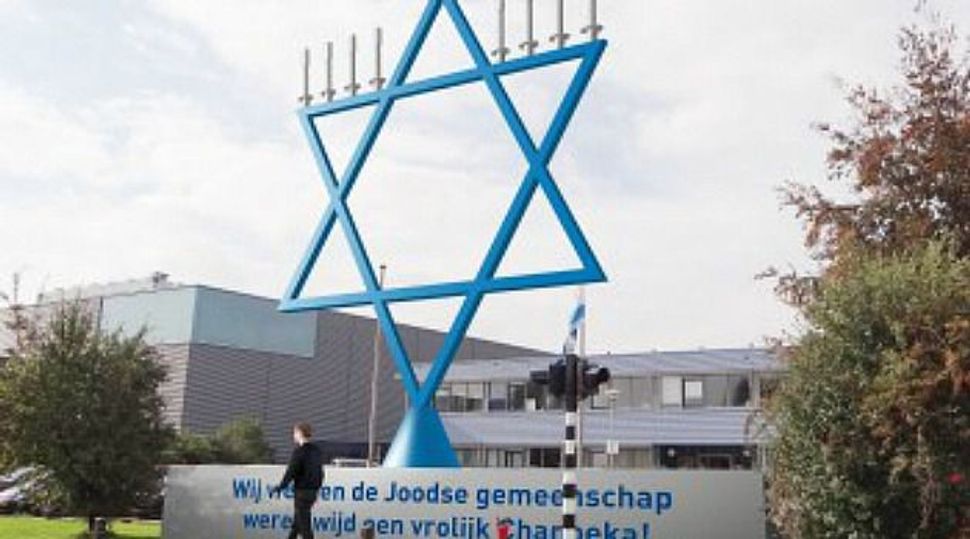 Christian Zionists in the Netherlands are building what they believe will be Europe’s largest menorah as a Hanukkah gift to the country’s Jewish community.

The Hanukkah candelabrum, or hanukkiah, will be approximately 36 feet tall and made out of metal, Sara van Oordt of the Netherlands headquarters of the Christians for Israel organization told JTA Monday. It will be placed near the group’s offices in Nijkerk, 30 miles east of the Dutch capital.

“We think that this is a good way to show our support and solidarity for the Jewish community worldwide,” van Oordt said.

Shaped like a Star of David, the giant object will have nine branches running along its top beam. According to Christians for Israel, it will be both Europe’s largest hanukkiah and its largest menorah.

It is scheduled to be inaugurated at Nijkerk on the eve of Hanukkah, Nov. 27, by Binyomin Jacobs, a chief rabbi of the Netherlands, who has agreed to light the first candle of Hanukkah at a public ceremony that is expected to draw several hundred people.

The hanukkiah cost just over $30,000 to make and is currently being manufactured in Friesland in the northern Netherlands under the supervision of Arjen Lont, the Christian Zionist owner of a construction firm. Lont, who also participated in the reconstruction of Jerusalem’s Montefiore windmill last year, has sponsored a part of the hanukkiah’s cost, according to van Oordt.

“We did not approach Jewish or Israeli businesses and donors, only Christian ones, because this is supposed to be our gift to the Jewish people,” added van Oordt.

The five-ton hanukkiah will be transported in several parts from Friesland to Nijkerk.

Jacobs told JTA that the Netherlands has several large menorahs and hanukkiot, which became popular with local Jews and Christians about 10 years ago.

“Not everyone was enthusiastic at first but they kept popping up,” he said. “It brings people who would not normally celebrate Hanukkah to partake and it shows the world in general that we, Jews, are also here and a part of this society.”

Currently, large menorahs or hanukkiot can be found in 18 Dutch cities including Amsterdam, The Hague, Maastricht, Haarlem, Groningen and Rotterdam, Jacobs said.