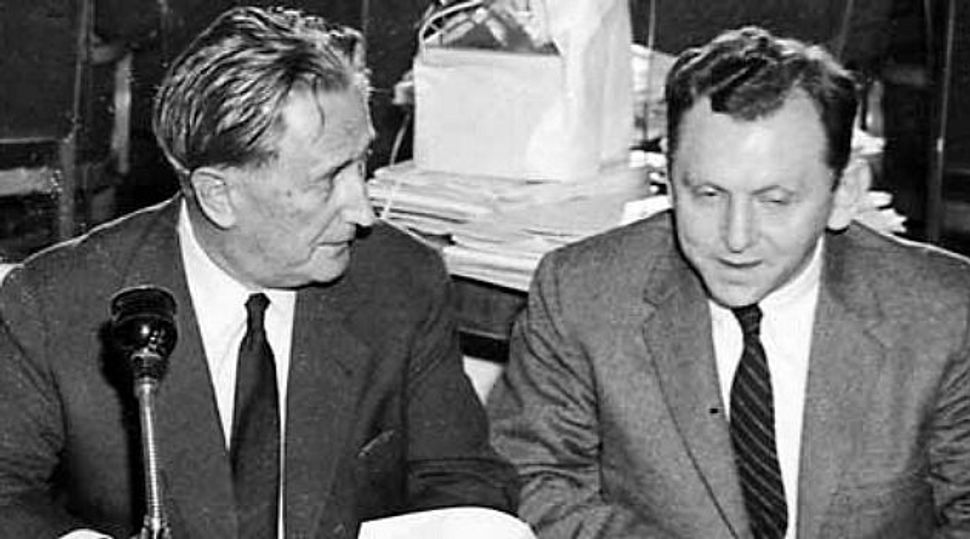 Fighter for Justice: Saul Kagan, right, was a founder and driving force behind the Claims Conference to provide restitution to Holocaust victims. Image by claims conference

(JTA) — Saul Kagan, the founder and a longtime chief of the Claims Conference, died Saturday at age 91.

Kagan helped found the organization in 1951 to be the main vehicle for negotiating with Germany over restitution for Holocaust survivors.

In a statement announcing his death, the Claims Conference credited Kagan with securing tens of billions in restitution payments during his 47 years at the helm of the organization.

“Saul always made his work about the mission and never about himself,” the Claims Conference said. “He was the very embodiment of humility, decency, integrity and wisdom.”

Kagan was himself a survivor. A native of Vilna, Lithuania, he fled the country in 1940 on a journey that took him to Vladivostok and Japan before reaching Hawaii. He eventually made his way to New York. His father survived the war in the Soviet Union, but his mother, brother and grandparents were killed by the Nazis.

Kagan found himself back in Europe before the war’s end as an intelligence officer in the U.S. Air Force. After the war Kagan, who spoke six languages, coordinated property restitution in Germany for the U.S. Army.

According to the Claims Conference, he was involved in the creation of U.S. Government military order No. 59, which allowed Holocaust survivors and victims’ families to file claims for property confiscated by the Nazis.

In 1952, Kagan played a key role in the landmark Luxembourg Agreements, when representatives of Israel, Germany and the newly created Conference on Jewish Material Claims Against Germany sat down to hammer out a reparations agreement for the crimes of Nazi Germany.

“There were no handshakes, there was no banter or anything else,” Kagan said in halting tones. “We somehow had the feeling that we were not alone in this room. Somehow we felt that the spirits of those who couldn’t be there were there with us.”

The document signed that year established payments from West Germany to the Claims Conference and Israel.

“For the first time in the history of the Jewish people, oppressed and plundered for hundreds of years … the oppressor and plunderer has had to hand back some of the spoil and pay collective compensation for part of the material losses,” Israeli Prime Minister David Ben-Gurion wrote in a 1952 letter to the Claims Conference’s first president, Nahum Goldmann.

The early years of restitution were quite contentious among survivors and the Jewish community. The Knesset saw violent confrontations over whether and how Israel should accept money from Germany, and Kagan was threatened by survivors and had to hire a bodyguard.

Kagan was instrumental in setting up some of the most significant compensation programs at the Claims Conference.

In 1980, Germany agreed to the establishment of the Hardship Fund, which has issued one-time payments of 2,556 euros (or their equivalent) to 390,000 victims of Nazism. Following the reunification of Germany, Kagan helped negotiate the creation of the Article 2 pension program to pay Nazi victims who had not received compensation from the agreements dating back to the 1950s. He also helped extend the Claims Conference’s purview to include restitution from Austria.

Through the Claims Conference, Kagan helped establish the Yad Vashem Holocaust memorial and museum in Jerusalem and the program to honor righteous gentiles – non-Jews who helped save Jews during the Holocaust.

Kagan stepped down from the helm of the Claims Conference in 1999 and was succeeded by Gideon Taylor.

Kagan’s name was back in the news this year when it emerged that he was among those CC’d on correspondence in 2001 about allegations of fraud at the Claims Conference. Investigations that year by Claims Conference leaders failed to detect a massive fraud scheme was underway that would rack up more than $57 million in fraudulent payments by the time it was discovered and stopped in 2009. The fraud dated back to 1993.

Even after he handed over the reins of the Claims Conference to Taylor, Kagan still did work on behalf of the organization. He also was a board member of the American Jewish Joint Distribution Committee, the Foundation for the Preservation of Jewish Heritage in Poland, the World Jewish Restitution Organization and Yeshiva University’s Wurzweiler School of Social Work.

Kagan is survived by his wife, Eleanor; a daughter, Julia; and stepchildren Jonathan and Emily Lobatto.