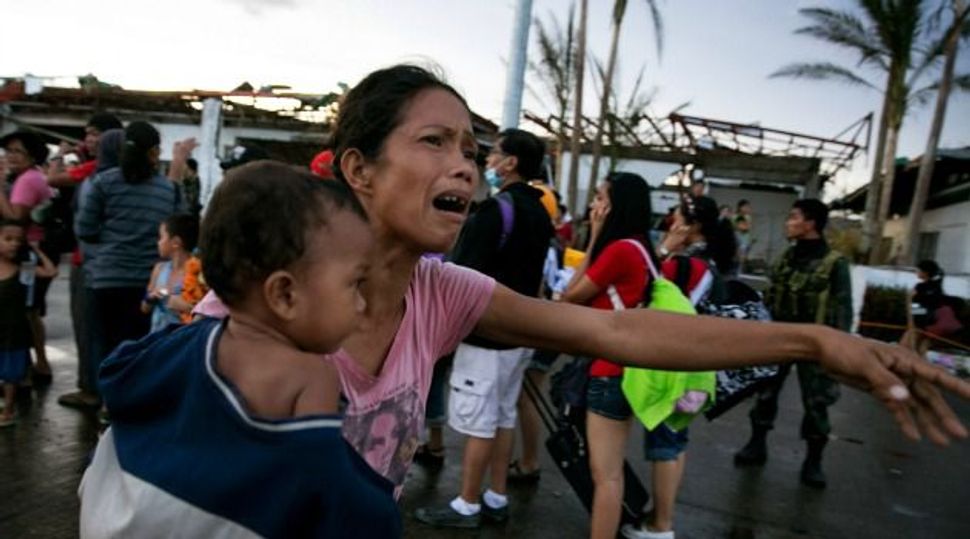 Representatives of the Israeli military landed in the Philippines to evaluate the situation on the ground and determine how Israel can best assist in the wake of Typhoon Haiyan.

The team, including search and rescue experts, doctors and representatives of the Home Front Command, arrived Monday. A representative of the Foreign Ministry arrived with the team, according to Ynet.

The Israel Defense Forces plans to send additional doctors and other officers once it receives the go-ahead from the government.

The Israeli team plans to set up a field hospital to treat wounded survivors of the typhoon.

The Jewish Federations of North America, Union for Reform Judaism and American Jewish Joint Distribution Committee are collecting donations to help the survivors.

The death toll in the typhoon, which made landfall in the central Philippines on Friday, could be at least 10,000, according to reports, though the official death toll currently stands at more than 1,700. At least half a million people also have been left homeless by the devastating typhoon.

“On behalf of the government and the people of Israel, I extend heartfelt condolences to the families of those who lost their lives as a result of the horrific typhoon, and I send best wishes for a speedy recovery to those who were injured,” Israeli Prime Minister Benjamin Netanyahu said in a letter to Philippines President Benigno Simeon Aquino III. “I hope Israel’s assistance will help alleviate the suffering of those affected by this disaster.”