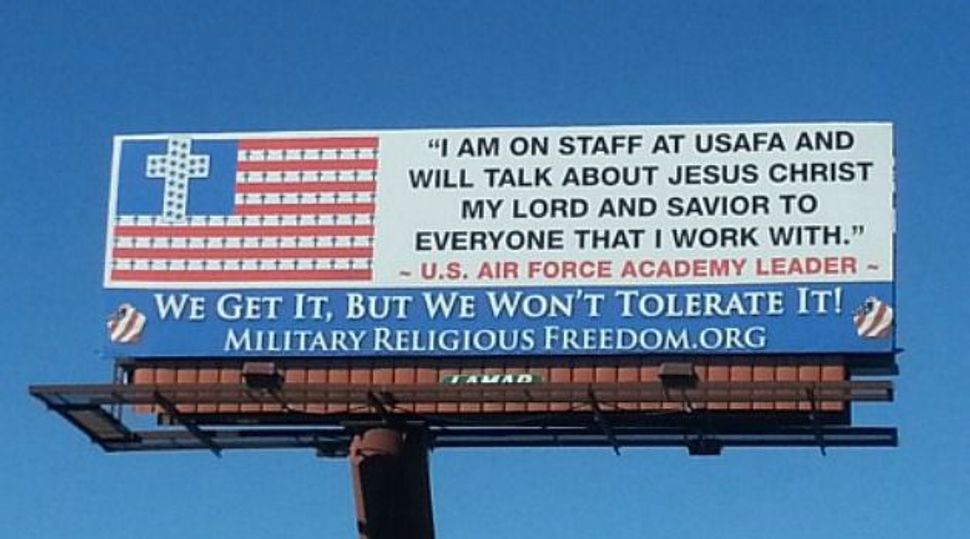 An email from an athletic trainer at the U.S. Air Force Academy pledging to “talk about Jesus Christ” at work does not reflect Air Force policy, the academy said, but the official will not be disciplined.

“Mr. Allen Willoughby does not speak for the Air Force’s Academy and we absolutely do not tolerate proselytizing among our ranks,” said a statement emailed Tuesday to JTA.

Willoughby this month emailed Mikey Weinstein, who founded the Military Religious Freedom Foundation, or MRFF, an organization that exposes and advocates against proselytizing in the military.

“God will always be a part of the U.S. Military even when you are gone to meet him face to face,” the foundation quoted the email as saying in a statement. “I am on staff at USAFA and will talk about Jesus Christ my Lord and savior to everyone that I work with.”

The U.S. Air Force Academy spokesman, John Van Winkle, said Willoughby would not be disciplined and noted that Willoughby sent “an e-mail to the MRFF in his personal capacity and not as a representative of the Air Force’s Academy or the Prep School.”

Weinstein said in a statement that he wanted Willoughby to face disciplinary hearings.

“We want an apology to me, my family and the foundation, and we want him disciplined,” he said.

The MRFF in response posted a billboard at an intersection in Colorado Springs, Colo. where the Academy is located. It features a U.S. flag made up of crucifixes and quotes Willoughby, and then adds: “We get it, but we won’t tolerate it!”