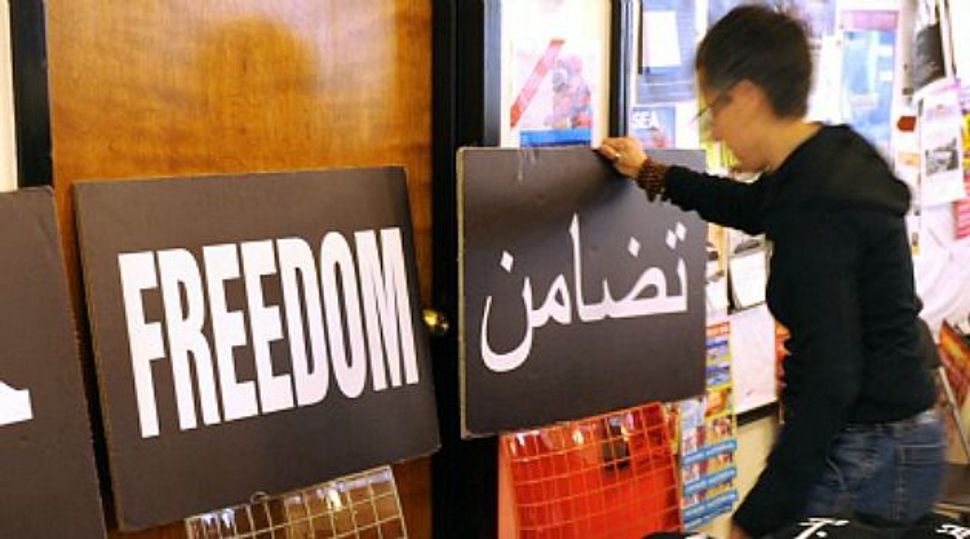 It?s Academic: Boycott Israel proponents are taking their movement from the fringes, like this 2011 organizing conference, to mainstream academe. And they are having success.

(JTA) — For 90 minutes in a packed hotel conference room in the heart of Washington, Israel was the colonizer, the settler state, the perpetuator of apartheid.

As the annual meeting this weekend of the American Studies Association demonstrated, participants who favored boycotting Israeli universities far outnumbered those opposed.

Of 44 speakers, 37 supported the resolution, in which the association would endorse and “honor the call of Palestinian society for a boycott of Israeli academic institutions.” The preamble to the resolution accused Israeli universities of complicity in the occupation.

The session Saturday evening was not determinative, however; it was an open invitation to the body’s membership to influence the association’s 20-person national council. The council was supposed to take up the resolution on Sunday morning, but by Tuesday evening it had not announced a decision.

“The national council meeting to discuss a resolution calling for the association to endorse a boycott of academic institutions in Israel remains open and deliberations are ongoing,” Curtis Marez, the group’s president, told JTA in an email.

Pro-Israel groups active on campuses were watching the session closely. Until now, the Boycott, Divestment and Sanctions movement — known as BDS — has made few inroads into American academe. One exception is the Association for Asian American Studies, which in April passed a resolution in favor of boycotting Israeli academic institutions.

Geri Palast, managing director of the Israel Action Network, which organizes pro-Israel activism on campus, said the American Studies Association meeting, which attracted a crowd of some 250 people, was expected to be another victory for the BDS movement in part because the American studies field is dominated by left-leaning academics who tend toward tough critiques of what they see as U.S.-enabled imperialism.

“My concern about some of these smaller academic associations is that they get amplified out of proportion,” Palast said.

Some opponents of the resolution said that however unrepresentative the session was of broader American society, it represents a growing trend on campuses toward endorsement of the BDS movement.

“They are organized and there are quite a few of them on campuses,” Simon Bonner, a professor of American studies at Penn State Harrisburg, said of academic activists who favor BDS.

Campus pro-Palestinian groups are energetic, Bonner said, and because of their single-issue focus they are likelier to get attention than Jewish student groups that are more diffuse in their activities, such as Hillel. In addition, he noted, Jewish groups tend more toward dialogue on the Israeli-Palestinian issue than toward activism.

“Despite the stereotypes of Jewish power, if there is a Jewish position, it is one of dialogue,” Bonner told JTA.

The majority of speakers at Saturday’s event painted a different picture, saying their pro-Palestinian campus advocacy was likelier to result in retribution — although aside from hate mail, no one described how such retaliation was manifested.

Whatever the case, for an hour-and-a-half academics favoring boycotting Israeli universities exulted in a mirror image of the Washington in which pro-Israel often is pre-eminent. A number of the speakers, particularly Palestinians, said the American Studies Association and the field it represents is a refuge from what they describe as an American society that is uninterested in their viewpoint.

“The boycott would represent a form of cultural divestment that is perfectly in keeping with the materialist politics of much of the methodology in American studies,” said Steven Salaita, an associate professor of English at Virginia Tech.

Supporters of the resolution said its warm reception at the conference was a signal of a shift in public opinion.

Prior to the session, backers of the resolution gathered around a large table and welcomed passers-by with glossy pamphlets; opponents were barely visible. Two handouts topped by a handwritten note saying “Opposed to Boycott” sat on a table otherwise crowded with an array of conference literature.

“The ASA’s open meeting was a clear indication that the time of fear and of the blockade on debate may be over — and that there is a new climate in which critical discussion of Israel’s policies towards Palestine will no longer be taboo,” David Lloyd, a professor of English at the University of California, Riverside, wrote on the Electronic Intifada website.