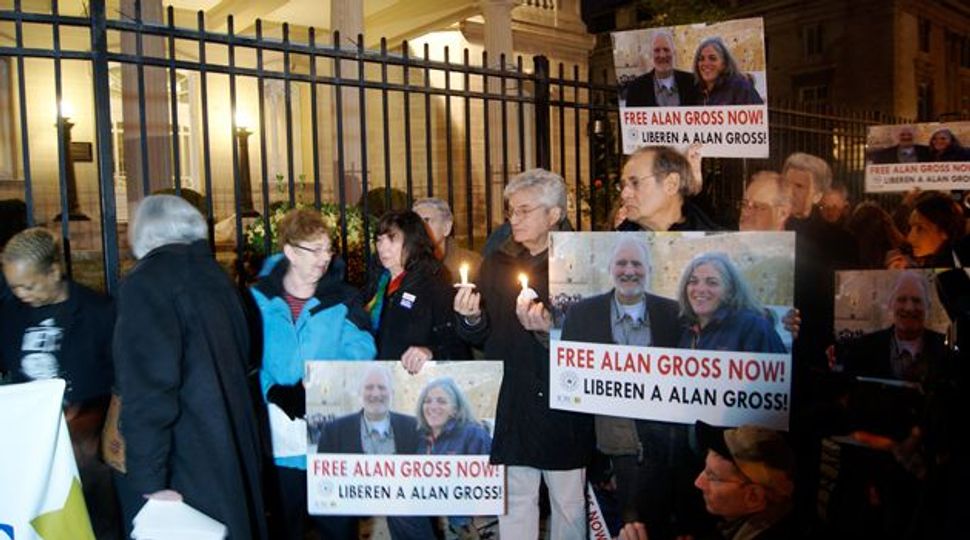 Alan Gross’ wife and Washington’s Jewish community will call on President Obama to make a priority of securing his release from a Cuban jail on the fourth anniversary of his imprisonment.

Judy Gross will appear with officials from the Jewish Community Relations Council of Greater Washington on Dec. 3 outside the White House in a protest.

Joining them will be other faith leaders and local elected officials.

Gross, a subcontractor for the State Department on a mission to hook up Cuba’s small Jewish community to the internet, was arrested in December 2009 as he was leaving Cuba. He is serving a 15-year sentence for “crimes against the state.”

At the Dec. 3 rally, Judy Gross will read an excerpt of her most recent letter from her husband.

“It is clear that only the president of the United States has the power to bring me home,” Gross says in an excerpt of the letter the family provided to JTA. “On behalf of my family and myself, on behalf of every American who might ever find himself or herself in trouble abroad – I ask President Obama to direct his administration to take meaningful, proactive steps to secure my immediate release.”

Judy Gross told JTA in an interview that her husband, 64, is depressed and is in chronic pain from arthritis.

“The best thing to do is contact the White House,” she said she would ask the American people at the rally. “Ask them to do what you need to do to get Alan home.”

She would not elaborate except to say that the “president has the power to do what it takes to get him home.”