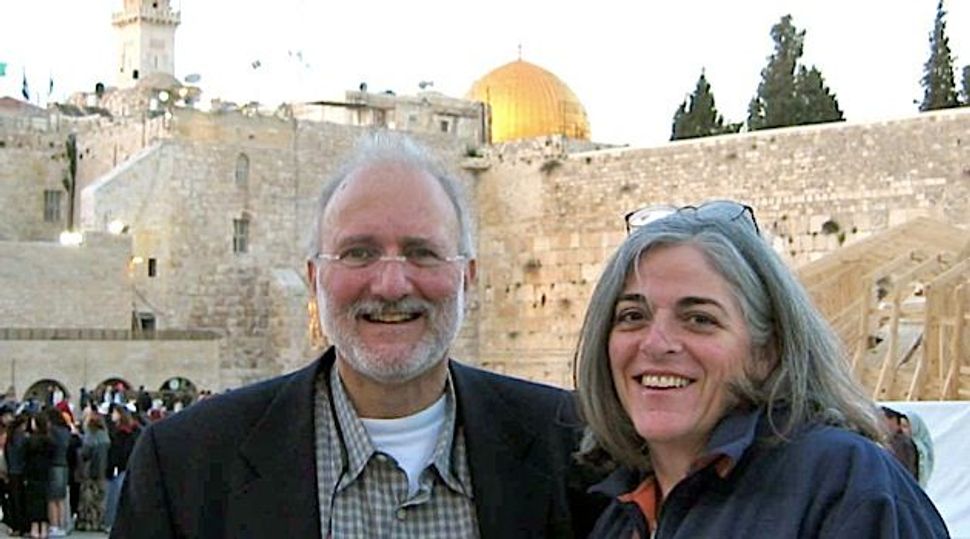 Alan Gross, with his wife, Judy, in Jerusalem in 2005. Image by Gross Family

The United States called on Monday for the immediate release of an American contractor jailed for the past four years in Cuba, saying his continued captivity on the communist-ruled island was “gravely disappointing.”

“Tomorrow, development worker Alan Gross will begin a fifth year of unjustified imprisonment in Cuba,” the U.S. State Department said in a statement.

“It is gravely disappointing, especially in light of its (Cuba’s) professed goal of providing Cubans with Internet access, that the Cuban government has not allowed Mr. Gross to return to his family, where he belongs.”

Gross was arrested in Havana on Dec. 3, 2009, for his work on a semi-covert U.S. program promoting political change on the island. Cuba has said it considered the work to be subversive.

Gross said he was in Cuba to set up communications equipment to give unrestricted Internet access to Jewish groups. A judge said that activity was a crime against the Cuban state and sentenced Gross to 15 years behind bars.

“Mr. Gross is a 64-year-old husband, father, and dedicated professional with a long history of providing aid to under- served communities in more than 50 countries. We reiterate our call on the Cuban government, echoing foreign leaders and even Cuba’s allies, to release Alan Gross immediately and unconditionally,” the State Department said.

Gross’s wife, Judy, will hold a vigil in Washington’s Lafayette Park, across from the White House, at midday on Tuesday to press for help from President Barack Obama to win her husband’s release, a lawyer for the Gross family told Reuters.

The vigil would be led by Jewish Council leaders and was to include the broadcast of a video recording from Gross, who has personally written to the president seeking his intervention in the case, said the lawyer, Scott Gilbert.

“Our view is that unless President Obama becomes personally involved in this matter, Alan Gross will die in jail.”

Gilbert said Cuba had agreed to sit down with U.S. government officials, without any pre-conditions, to discuss possible terms leading to Gross’s release and return home. But the State Department has rejected any negotiated settlement of the Gross case out of hand.

“It’s a great puzzlement to me why no decisive action has been taken on Alan Gross, particularly when Alan is imprisoned in Cuba solely because of his work on a U.S. government project,” Gilbert said.

The Gross case has often been described as an obstacle to any serious improvement in U.S. relations with Cuba after more than 50 years of hostility.