Home of Women of the Wall Board Member Vandalized in Jerusalem 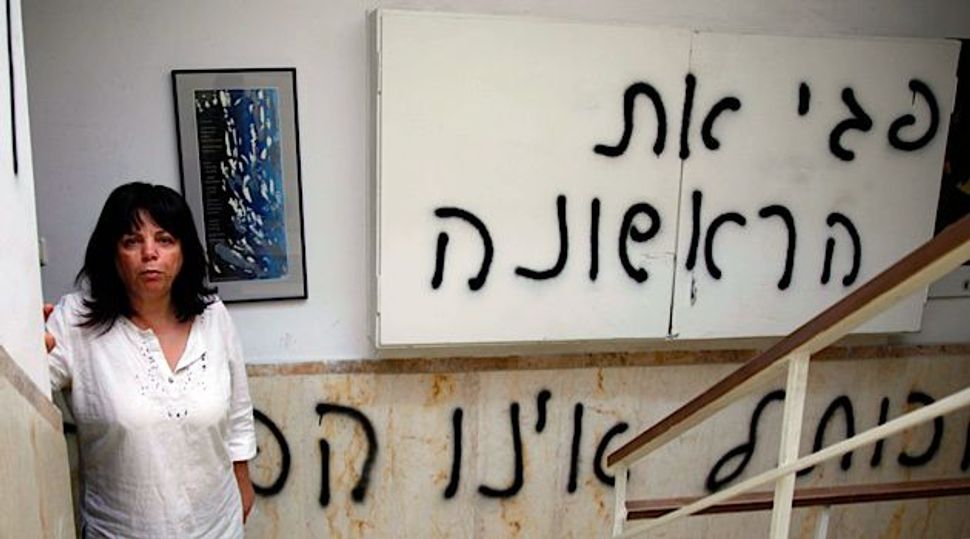 Israeli Peggy Cidor, one of the leaders of ?Women of the Wall? stands in the stairwell leading to her apartment after vandals spray-painted slogans against the group. Image by getty images

Graffiti calling Women of the Wall “scum” was painted outside the Jerusalem apartment of one of the group’s board members.

The graffiti discovered Thursday morning in the public stairwell of the apartment of Peggy Cidor, in the Jerusalem neighborhood of Talpiyot, also read “Peggy, watch out ” and “Women of the Wall are villains.”

Cidor also was threatened with graffiti outside of her home in May, when the words “Torah tag” – evoking the term “price tag” that is used to describe random acts of violence against Palestinians by radical settlers – was spray-painted on the door to Cidor’s apartment. “Peggy, Your Time has Expired,” and “Women of the Wall are wicked,” also appeared in that attack of vandalism.

Thursday’s attack comes a day after at least 800 members and supporters of Women of the Wall gathered at in the women’s section of the Western Wall Plaza for morning services for the new Jewish month of Tevet.

Home of Women of the Wall Board Member Vandalized in Jerusalem