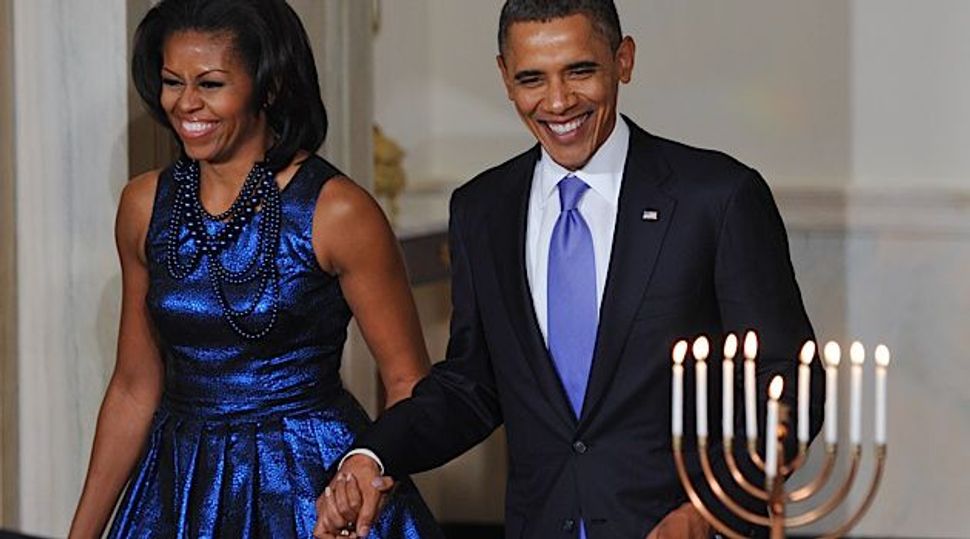 President Obama is for the first time hosting two White House Hanukkah parties to accommodate the high demand for attendance at such events.

Like Bush, the Obama White House each year faces a crush of requests to attend from Jewish organizational heads, Jewish lawmakers, Jewish donors and others.

Rabbi Levi Shemtov, the director of American Friends of Lubavitch, who supervises kashrut at the White House Hanukkah parties, says that this year has been an especially busy Hanukkah season, with as many as 14 menorah lighting events, many of them organized by his office.

The highlight, he told JTA, was the first ever menorah lighting at Gallaudet University, a university for the deaf and hard of hearing, attended by about 200 Jewish students. There were also two events at Congress, one Tuesday hosted by Lubavitch and another set for Thursday night, to be hosted by Rep. Debbie Wasserman Schultz (D-Fla.), the chairwoman of the Democratic National Committee.

The annual lighting of a giant menorah on the Ellipse facing the White House – dubbed informally the “national menorah” — took place on the first night of Hanukkah, Nov. 27.

About a thousand people braved unseasonably cold weather that evening, and Michael Froman, the U.S. Trade Representative – a Cabinet level position – assisted in the lighting of the menorah.

On Wednesday, a number of Jewish groups participating in a day-long fasting protest for undocumented immigrants on the National Mall, including the National Council of Jewish Women, the Jewish Council on Public Affairs and the Reform movement’s Religious Action Center, held a menorah-lighting ceremony in the protest tent.