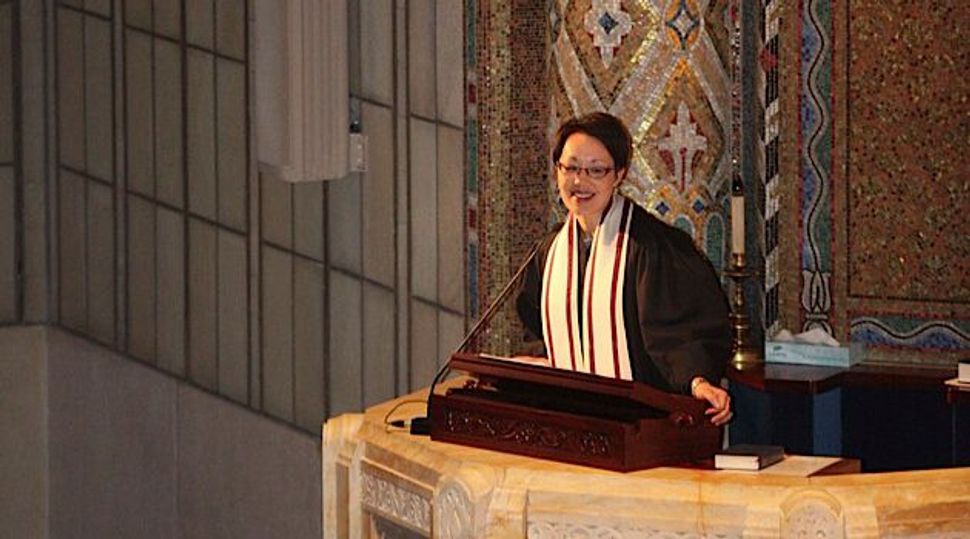 Angela Warnick Buchdahl was named Senior Rabbi of Manhattan’s Central Synagogue last night in a unanimous vote by the synagogue’s Board of Trustees, making her the first Asian-American leader of one of the nation’s largest Reform synagogues. Buchdahl currently serves as the synagogue’s Senior Cantor and will succeed Senior Rabbi Peter Rubinstein, who announced his retirement in March after leading the synagogue for 23 years.

“The Committee and the Board believe wholeheartedly that Rabbi Buchdahl is the right person to lead Central forward,” said David Edelson, the synagogue’s president, in a letter to the congregation. “We should all be proud that our next Senior Rabbi will be one of our own.” Buchdahl was the first woman to receive ordination as both a rabbi and a cantor. She is also the first Asian-American to hold both positions.

Born in South Korea in 1972 to an American Jewish father and a Korean Buddhist Mother, Buchdahl represents a new, diverse face of American Jewry, as described in a recent profile by the Forward. Buchdahl’s parents moved the family from South Korea to Tacoma, Washington, when their daughter was four years old, and joined Tacoma’s Temple Beth El, where Buchdahl discovered an early affinity for Jewish music and education.

Buchdahl was involved in campus Jewish life and studied religion at Yale University, where she met her future husband, Jacob Buchdahl. She received her ordination from Hebrew Union College-Jewish Institute of Religion in 2001.

“Rabbi Angela Warnick Buchdahl is one of the most inspiring religious leaders you will ever meet,” wrote Rabbi Rick Jacobs, president of the Union for Reform Judaism, after learning of her appointment. “All of our Movement will be touched by her extraordinary spiritual gifts.”

Though she is stepping down from her cantorial position, Buchdahl will continue to sing as the congregation’s senior rabbi. “She intends to draw on the strengths of her rabbinic and cantorial skills to inform and enrich how she leads the congregation,” Edelson wrote.