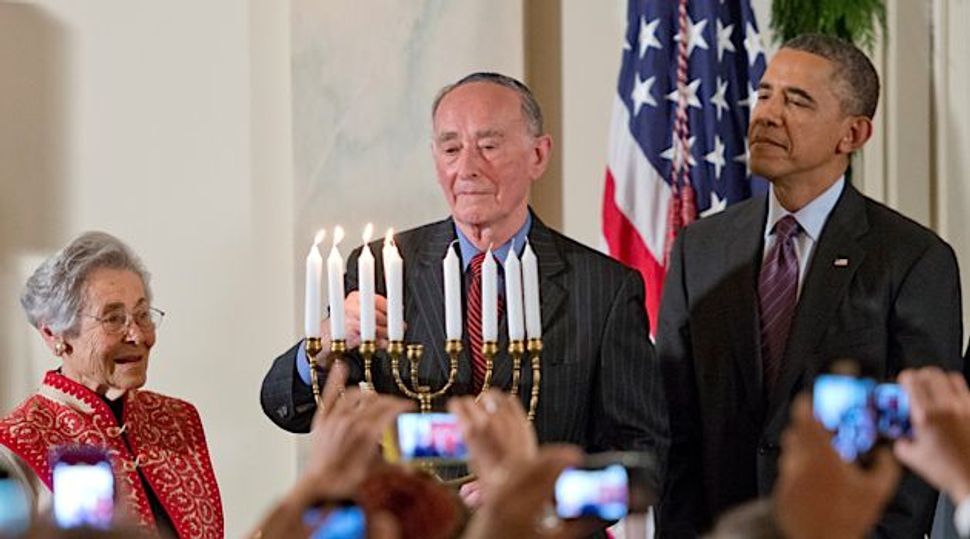 Two menorahs with Holocaust era associations were used at White House Hanukkah receptions, and “Thanksgivukkah” and the “menurkey” got mentions as well.

President Obama for the first time hosted two Hanukkah parties on Thursday – the last day of the holiday, and technically after the final menorah lighting time – because of the overflow.

The first session, in the afternoon, featured a menorah designed by Manfred Anson, who fled Nazi Germany in 1939 for Australia and joined his sister in New York in 1963.

He became a collector of Americana and in 1986, on the centennial of the Statue of Liberty, he designed a menorah made up of statuettes modeled on the statue.

Lighting a menorah cast from Anson’s original mold was the family of Jacob Schmitter, who is deployed in Afghanistan.

The menorah used at the evening reception is from the former Czechoslovakia. Abraham and Hayyah Ettinger donated it to their synagogue, in Hrušov, in 1922; the Ettingers are known to have perished in the Holocaust.

Lighting this menorah were survivors of the Holocaust from the former Czechoslovakia, Margit Meissner and Martin Weiss.

“Together with our Israeli friends, we’re determined to prevent Iran from obtaining a nuclear weapon,” he said, referring to talks underway between Iran and the major powers to roll back Iran’s nuclear program in exchange for sanctions relief.

“Building a future of security and peace is not easy,” Obama said. “But the story of Hanukkah, of survivors like Margit and Martin — leaders like Nelson Mandela — remind us that those who came before us overcame even greater obstacles than those that we face. So let’s take strength from their struggles and from their sacrifice. Let’s give thanks for miracles large and small.”

A “menurkey” – a menorah in the shape of a turkey – featured at both receptions, and its creator, 10-year-old Asher Weintraub of New York City, was a guest at the first reception, as was Dana Gitell, the Boston mom who coined the term “Thanksgivukkah” and who trademarked it.

This year, the first night of Hanukkah fell on the evening before Thanksgiving, which Obama noted in his remarks at the first reception while giving a shout-out to Weintraub and Gitell.

“They’ve had a lot of fun with their project,” Obama said. “But there is a serious side to it because they’ve said they always express their gratitude to America, a place where no matter who you are, you can always celebrate your faith.”