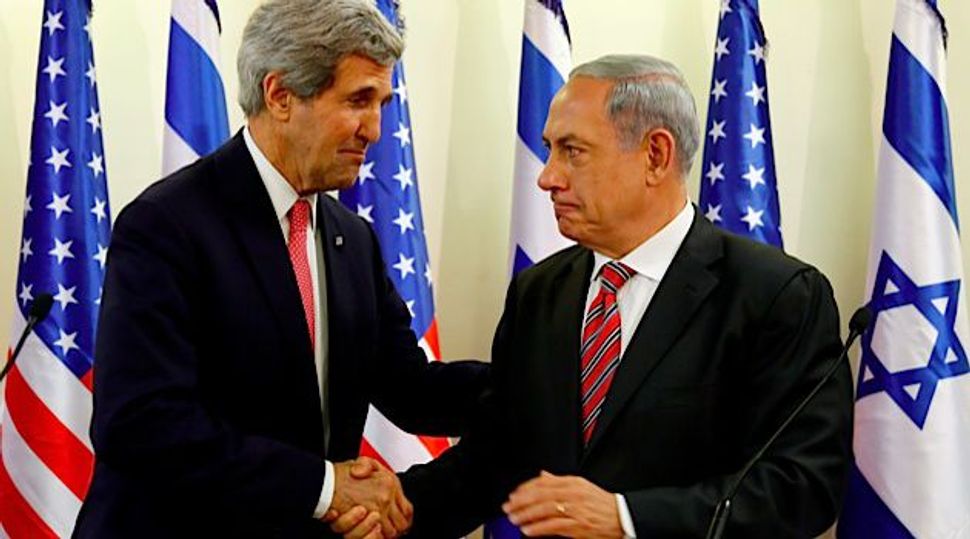 In a nod to Israeli concerns, President Obama and U.S. Secretary of State John Kerry tamped down expectations of a final status Israeli-Palestinian peace deal, saying any agreement would have a transition stage.

The remarks by both men to the Saban Forum on Saturday, coming just a day after Kerry’s eighth visit to the region since he assumed his job ten months ago, are the first sign that the Obama administration is tamping down expectations of a final status agreement to come out of renewed Israeli-Palestinian talks.

“Ultimately, the Palestinians have to also recognize that there is going to be a transition period where the Israeli people cannot expect a replica of Gaza in the West Bank,” Obama told the annual forum, a gathering of top Israeli and U.S. figures of influence convened by the Saban Center, the Middle East-focused arm of the Brookings Institution. “That is unacceptable.”

He was referring to Israel’s unilateral 2005 withdrawal from the Gaza Strip, which was followed by years of rocket attacks led by Hamas, the terrorist group that unseated the Palestinian Authority in the strip after the Israeli pullout.

The remarks are a concession to Israeli Prime Minister Benjamin Netanyahu’s government, whose ministers have said that a final status result by mid-2014 – Kerry’s stated goal when he reconvened the talks over the summer – is unrealistic.

“I think we believe that we can arrive at that point where Israel was confident about that,” Obama said, referring to a time when Israel would relinquish security controls in the West Bank. “But we’re going to have to see whether the Israelis agree and whether [P.A.] President [Mahmoud] Abbas, then, is willing to understand that this transition period requires some restraint on the part of the Palestinians as well. They don’t get everything that they want on day one. And that creates some political problems for President Abbas, as well.”

Instead of referring to a final status agreement, Obama described “a framework that does not address every single detail but gets us to a point where everybody recognizes better to move forward than move backwards.”

Kerry, speaking to the same group later the same day, said Israeli security was necessarily a focus of the recent talks, an apparent pushback against Palestinian negotiators who have said that the talks overly emphasize Israeli security and do not sufficiently address Israeli settlement expansion.

“On this visit, I spent most of the time focused on Israel’s security concerns because for years and years and years, it has been clear to me from every prime minister that unless a prime minister can look the people of Israel in the eye and make it clear to them that he has spoken for Israel’s security to a certainty, you cannot make peace,” Kerry said.

“It is a prerequisite,” he said. “And for anyone who feels somehow there might be an unfairness in that, all you have to do is look at the history and understand why that’s a fundamental reality. And I mean all of the history.” Kerry, too, anticipated a transition period that would maintain an Israeli role in West Bank affairs.

“We anticipate that the United States will continue to play a leading role in building – helping to build Palestinian capacity, helping to build their capabilities to maintain law and order; to cooperate in an effective judicial system; to counter terrorism and smuggling; and manage border security, customs, immigration,” Kerry said. “Needless to say, for a period of time this will obviously involve Israeli participation. It has to.”