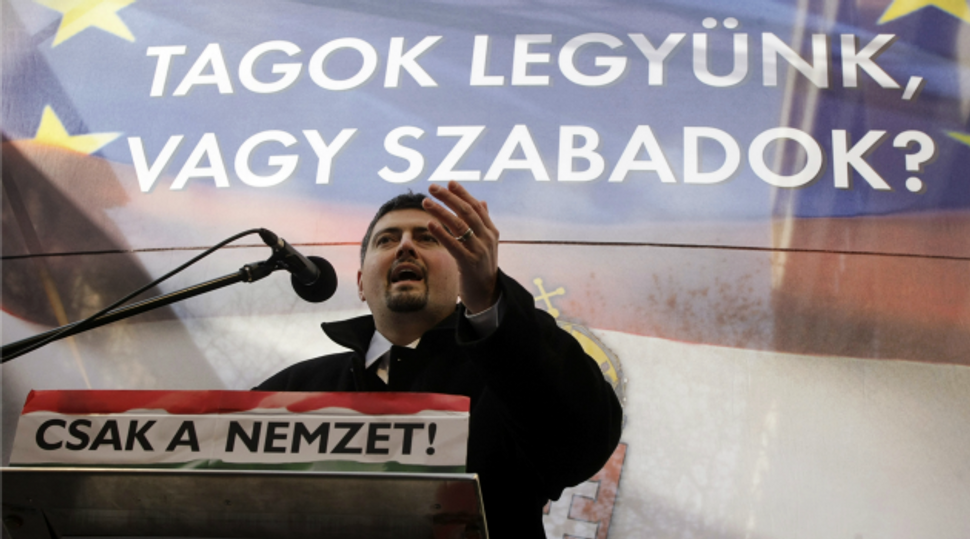 Back to Budapest: Csanad Szegedi was slated to speak at a Chabad in Montreal before immigration officials ordered the former far right leader out of the country. Image by Getty Images

A former leader of the ultranationalist Jobbik party in Hungary was sent out of Canada prior to a speaking engagement in Montreal.

On Sunday, Canadian immigration officials ordered Csanad Szegedi on a plane back to Budapest just before he was slated to address a Chabad group. Approximately 200 people who came out to hear Szegedi, who two years ago discovered he had a maternal Jewish grandmother and was ousted by Jobbik, instead heard a videotaped message.

“I acknowledge that I have a lot of sins,” Szegedi said. “And this is why I understand those people who are not happy me being here. But these sins I try to rectify not only at the verbal level but at the level of my actions.

“I have to tell the Canadian Jewish community … that I am exactly such a Jew as they are. I cannot help it — as you cannot help it.” Szegedi, 31, was a leading figure in the neo-fascist Jobbik party for a decade and was known for his rabid anti-Semitism. After discovering his Jewish relative — an Auschwitz survivor — he made contact with Chabad representatives in Hungary. He since has embraced his Jewish roots and publicly denounced Jobbik.

His talk at Montreal’s Chabad of Westmount was titled “My Journey From Hater to Fighter of Hatred.”

The speaking engagement had caused a backlash in Montreal’s Jewish community, with some requesting that the invitation be rescinded. His detractors charge that his denunciation of Jobbik is insincere and that he only embraced his Jewish identity after he failed to suppress the news through bribery.

Devorah Shanowitz, the program director of Chabad of Westmount, told Global News that Szegedi was invited to speak to illustrate the prevalence of anti-Semitism in Europe. She said the reasons for Szegedi’s deportation were unclear.

“From what I understand, there were some members of the community who felt very strongly that Mr. Szegedi should not be here to tell his story,” Shanowitz told the Montreal Gazette. “They sent a file of his past activities to Immigration Canada, and there was no evidence in those files that he had since moved away from his previous lifestyle.”

She said authorities first wanted to question Szegedi but later decided not to allow him to stay in Canada.

“Even though our talk was at 7 [p.m.], he had to leave an hour before everyone came here,” Shanowitz said.

Officials with Citizenship and Immigration Canada said the release of any details of Szegedi’s deportation would depend on whether he signs a privacy waiver.