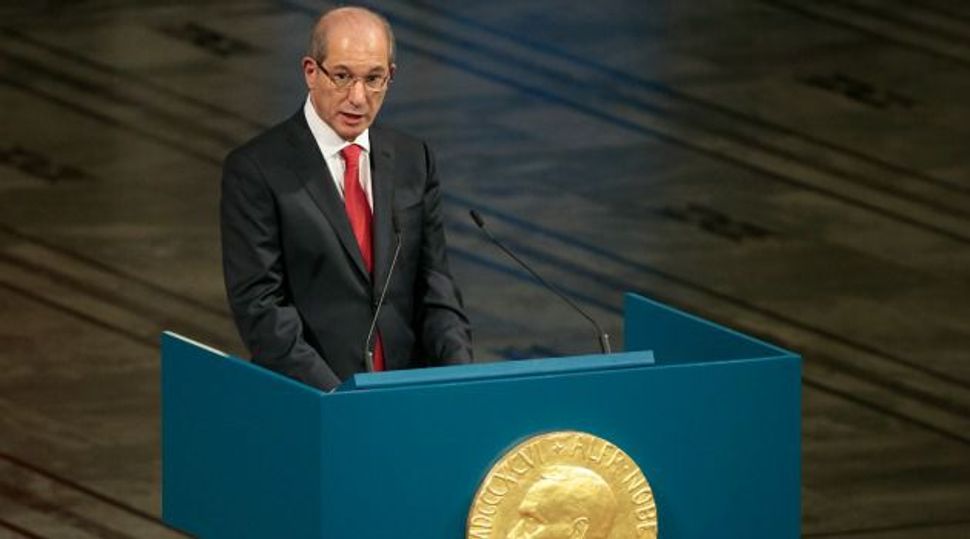 Working for Peace: Ahmet Uzumcu, head of the Organisation for the Prohibition of Chemical Weapons, accepted a Nobel Peace Prize on behalf of his organization in 2013. Image by Getty Images

Israel, Egypt and North Korea should renounce chemical weapons, especially after Syria joined the convention banning them and three other nations plan to do so, the chief of an international watchdog said on Tuesday.

Ahmet Uzumcu, head of the Nobel Peace Prize-winning Organisation for the Prohibition of Chemical Weapons (OPCW), said Angola, Myanmar and South Sudan were preparing to join the pact.

“Now since Syria has become a member country, I think (Israel) can reconsider,” Uzumcu told Reuters in Oslo, where he accepted the 2013 Nobel award for the OPCW.

Israel, which has observer status at the OPCW, signed the convention in 1993, but has never ratified it.

As with its presumed nuclear arsenal, Israel has never publicly admitted having chemical weapons. Intelligence Minister Yuval Steinitz said in September that Israel would be ready to discuss the issue when there was peace in the Middle East.

“I don’t see any excuse for not joining the convention,” Uzumcu said. “Three (nations) are very close to membership and I hope the others will reconsider their positions.”

The OPCW’s mission gained critical importance this year after a sarin gas attack outside Damascus in August killed hundreds of people, exacerbating a 2-1/2-year-old conflict in Syria in which more than 100,000 have died.

Syria then agreed under a deal arranged by the United States and Russia to destroy all of its 1,300 tonnes of sarin, mustard gas and other lethal agents, averting U.S. missile strikes.

“The only consolation is that those attacks led to renewed efforts by the international community to eliminate them,” Uzumcu said, referring to chemical weapons around the world.

Work is Syria is hampered by security challenges and needs more money but the Syrian government is doing its best to cooperate and OPCW expects soon to secure a port where the deadliest chemicals can be neutralised offshore, he said.

“There are some contacts which are under way and we may be informed within a week to 10 days,” Uzumcu said, without identifying the port. “The Syrian government has been quite cooperative, constructive and transparent so far.”

The United States is donating a naval ship and equipment to destroy Syria’s most dangerous chemical weapons but securing a port has proven especially difficult and the OPCW is at risk of missing its Dec. 31 deadline to remove these weapons from Syria.

Getting rid of the less dangerous weapons is also a challenge, unless more funds are forthcoming, Uzumcu said.

“The financial contributions have been encouraging but we expect more because we have built a trust fund for the second category of chemical substances, which will have to be destroyed at commercial plants,” he said.

“The United States will cover all the costs for the priority-one chemical weapons. For the second category of weapons, we estimate 35 to 40 million euros,” Uzumcu said.

The OPCW hopes to remove all chemical weapons from Syria by Feb. 5 and to destroy them by June 30. The most dangerous of the chemicals, about 500 tonnes, will be processed by the United States and stored at an undetermined location.

The U.S. ship cannot sail into a Syrian port so current plans call for Danish and Norwegian merchant ships to get the chemicals out, some to be transferred to the U.S. vessel and the less lethal ones to commercial chemical plants for incineration.