Kerry Returns To Israel To Try To Save Faltering Peace Talks 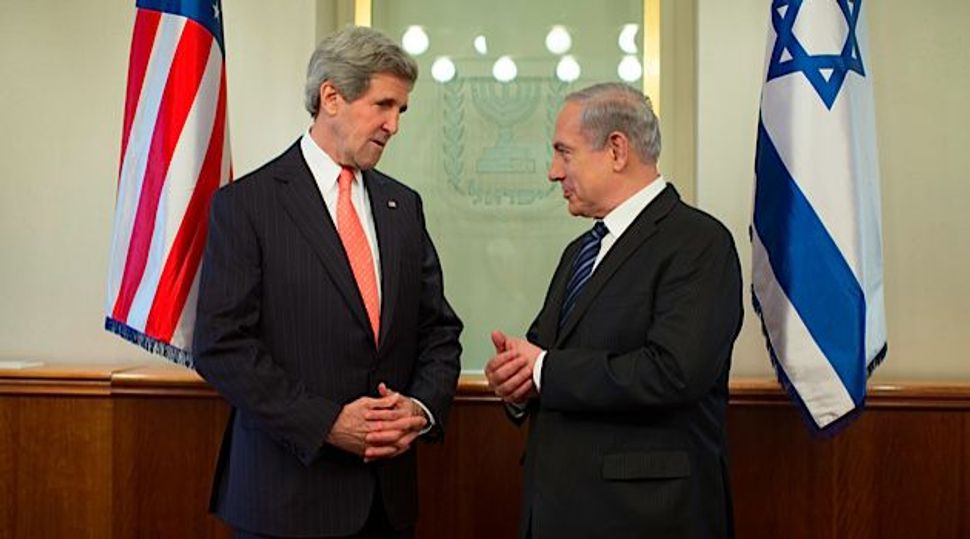 U.S. Secretary of State John Kerry headed back to the Middle East on Thursday, a week after his previous visit ended with Palestinian dissatisfaction over U.S. security ideas for an elusive land-for-peace deal with Israel.

Kerry, who has quipped that his frequent trips to the region have become a commute, planned separate meetings with Palestinian President Mahmoud Abbas and Israeli Prime Minister Benjamin Netanyahu.

It will be the top U.S. diplomat’s ninth visit to Israel since becoming secretary of state in February. Israel and the Palestinians resumed U.S.-brokered peace talks in July after a three-year break, aiming to reach a deal in nine months.

Amid little public sign of progress in the negotiations, Kerry said he had presented Israel and the Palestinians last week with “some thoughts” on security arrangements in any future accord, but gave no details.

A Palestinian source said that a U.S. security proposal last week outlined an Israeli military presence in the Jordan Valley, which is in the occupied West Bank, for 10 years.

Israel has long said it wants to keep a military presence in the Jordan Valley between the West Bank and Jordan, in what would constitute the eastern border of a future Palestinian state.

The Palestinians reject that Israeli stipulation, and on Monday a senior Palestinian official accused Washington of bowing to Israel’s security demands to silence its criticism of world power diplomacy over Iran’s nuclear programme.

Israeli and U.S. officials have signaled that Washington is trying to achieve a framework agreement on all major issues of the decades-old conflict that would be fulfilled in phases, in a nod to Israeli security concerns.

Netanyahu has voiced worries that without an Israeli troop presence, Islamist militants could use the West Bank as a launching point for rocket attacks on Israel, much as they have in the Gaza Strip, from which Israel pulled out in 2005.

“Israel’s security and the security of its citizens cannot be placed in the hands of foreign forces or in the hands of electronic means alone,” Israeli Strategic Affairs Minister Yuval Steinitz said on Israel Radio.

“Our security must be in our own hands,” he said. “I know it is hard for (the Palestinians) to swallow but they will have to accept … that Israel has security interests it cannot forgo, and if they want peace, they must make significant compromises.”

In Washington on Saturday, U.S. President Barack Obama said the Palestinians had to recognize there would be a transition period “where the Israeli people cannot expect a replica of Gaza in the West Bank”.

“They (the Palestinians) don’t get everything that they want on Day One. And that creates some political problems for President Abbas, as well,” Obama said.

The Palestinians, who seek a state in the West Bank and Gaza Strip with East Jerusalem as its capital, have long rejected any interim agreement.

But Western-backed Abbas, who has held sway only in the West Bank since his Hamas Islamist rivals seized the Gaza Strip in 2007, has hinted he would agree to a gradual implementation of a final accord. Hamas refuses to recognize Israel.

State Department spokeswoman Jen Psaki said talks on security arrangements would continue during Kerry’s visit but other issues would be discussed as well.

Kerry Returns To Israel To Try To Save Faltering Peace Talks