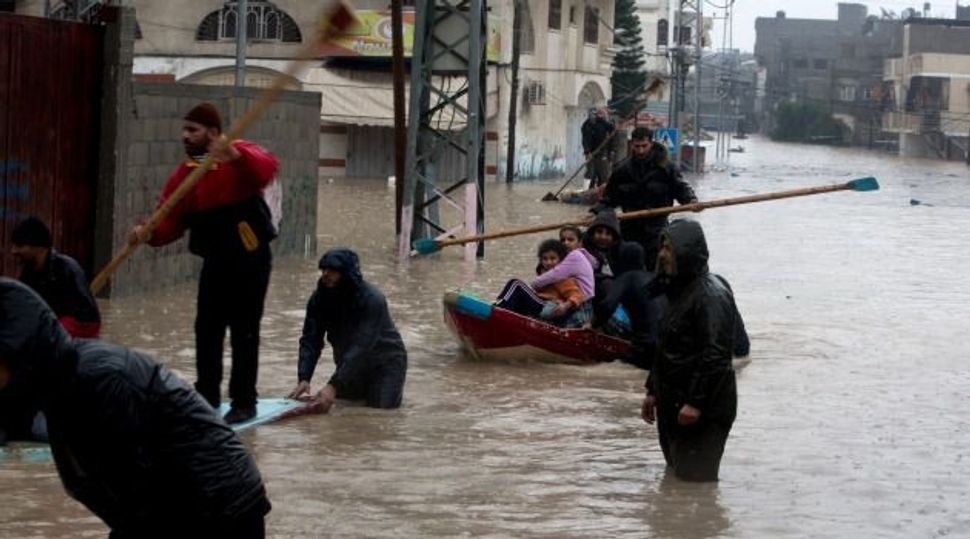 More than 4,000 people have been evacuated from flood-damaged homes in northern Gaza in what the United Nations has called “a disaster area”, officials said on Saturday.

Flooding has been so severe that access to many homes is by rowing boat and water is reported to be two metres (more than six feet) high in some places. Many people have been trapped inside inundated homes by rising waters.

The flooding is the result of four days of torrential rains.

“Large swathes of northern Gaza are a disaster area with water as far as the eye can see,” the United Nations Relief Works Agency (UNRWA) that administers refugee camps in the Palestinian territory, said in a statement.

The Gaza health ministry said 100 people had suffered injuries in the severe weather, which damaged poorly built homes in the coastal territory, including from car accidents on flooded roads, and items falling from inundated buildings.

Gaza’s Hamas government said 4,306 in all had been evacuated to schools and other centres used as makeshift shelters in the past four days.

Gaza’s 1.8 million people has also been enduring around 12-hour blackouts daily since the lone power plant was switched off last month due to a fuel shortage.

One of the most densely populated tracts on earth, Gaza is home to mostly impoverished refugees and their descendants.

The territory lacks much basic civil infrastructure and lives under an Egyptian-Israeli blockade meant to cut off arms flows, but which also curbs imports of fuel, building supplies and basic goods.

Israel opened a main crossing with Gaza on Friday to allow in fuel supplies and four water pumps to help relieve flood damage.

Gaza’s prime minister, Ismail Haniyeh, urged the Arab League on Saturday to take steps to end the blockades of his territory, a statement from his office said.