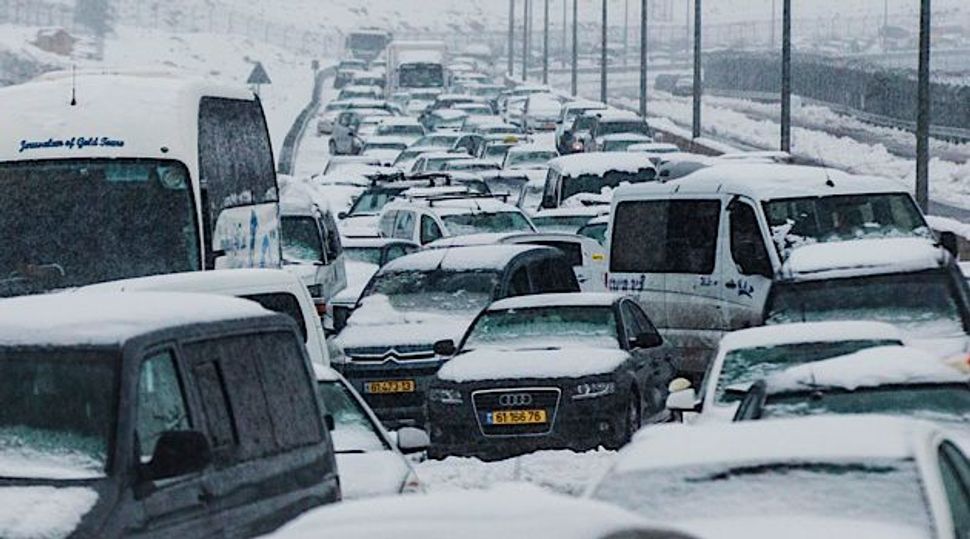 Cars remained stranded in the snow on a highway to Jerusalem. Image by getty images

Some 14,000 Israeli households remained without power in the wake of what is being called Israel’s worst snowstorm in decades.

Six thousand of the households still cut off from electricity on Sunday after up to 72 hours are in Jerusalem, the Israel Electric Corporation reported.

At the height of the bad weather, some 60,000 households did not have electric power, many due to downed power lines from trees that fell in the storm.

Israel on Sunday began transferring fuel to Gaza to run the strip’s sole power plant, and has committed to sending more fuel in on Monday and Tuesday. The fuel transfers come after Israel on Friday allowed into Gaza gas for home heating. The Israel Defense Forces assisted in clearing roads in the Palestinian Authority areas of the West Bank.

Schools in Jerusalem and its environs remained closed on Sunday, as did schools in Safed, the Golan Heights and areas of the Galilee.

The major Jerusalem-Tel Aviv highway on Sunday morning was open in both directions for public transportation, but was open to private vehicles only for leaving the city. The road was opened and closed several times Sunday morning due to dangerous ice patches. Roads leading to the Etzion bloc south of Jerusalem, which was hard-hit by snow, remained closed on Sunday.

Trains left from Jerusalem for Haifa and Tel Aviv on Saturday, after the ban on public transportation on the Sabbath was lifted for the emergency.

At least four people died as a result of the storm, according to reports.

We were as prepared as a country should be for an event like this,” Israeli Prime Minister Benjamin Netanyahu said during a Saturday evening news conference, amid calls for an investigation into responses to the emergency.

It is estimated that repairing damage from the storm will cost the state over $34 million, according to reports. Temperatures throughout Israel on Sunday remained colder than expected for this time of year under sunny skies.