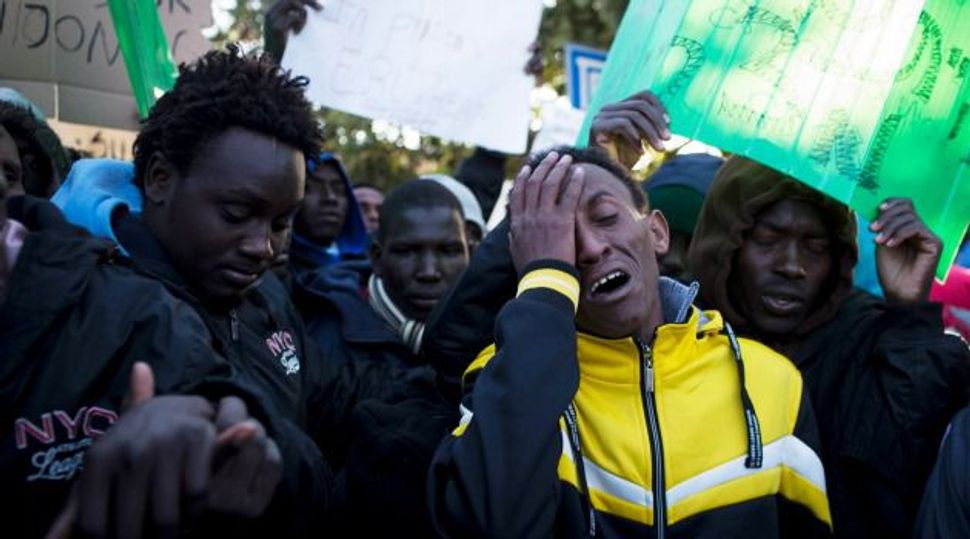 Crying Shame: An African migrants cries as Israeli police and immigration officers prepare to arrest them during a demonstration outside the Israeli Parliament. Image by getty images

Hundreds of African migrants gathered outside the Prime Minister’s Office in Jerusalem protesting Israel’s policy of detaining asylum seekers were put on buses back to a detention facility.

The protesters, holding signs reading “I didn’t choose to be a refugee,” “we are in danger, not dangerous” and “you were strangers in the land of Egypt,” launched their demonstration on Tuesday after leaving the Holot detention facility a day earlier.

Police and government officials had threatened to arrest the protesters if they caused disturbances. At the end of the demonstration they were forced by immigration officials on buses taking them back to the detention facility.

About 150 of the migrants had spent Monday night at Kibbutz Nachshon near Jerusalem, where they were provided with food and clothing after walking from the Holot facility in the Negev Desert to Beersheva.

Volunteers had brought them to the kibbutz after immigration officials refused to allow the migrants to board buses for Jerusalem. They walked from the kibbutz to Jerusalem on Tuesday.

The Holot residence is called an “open facility,” with detainees free to leave during the day and with mandatory check-in at night. They are not allowed to hold jobs.

Nearly 350 of the facility’s 484 residents, who were transferred there late last week, have not returned to the detention center in recent days, Haaretz reported.

Some of the protesters have been on a hunger strike since being brought to Holot.

The Knesset last week approved an amendment to the Migrant Law to allow Israeli officials to hold African migrants in prison for up to a year without trial and in the open detention facility indefinitely.