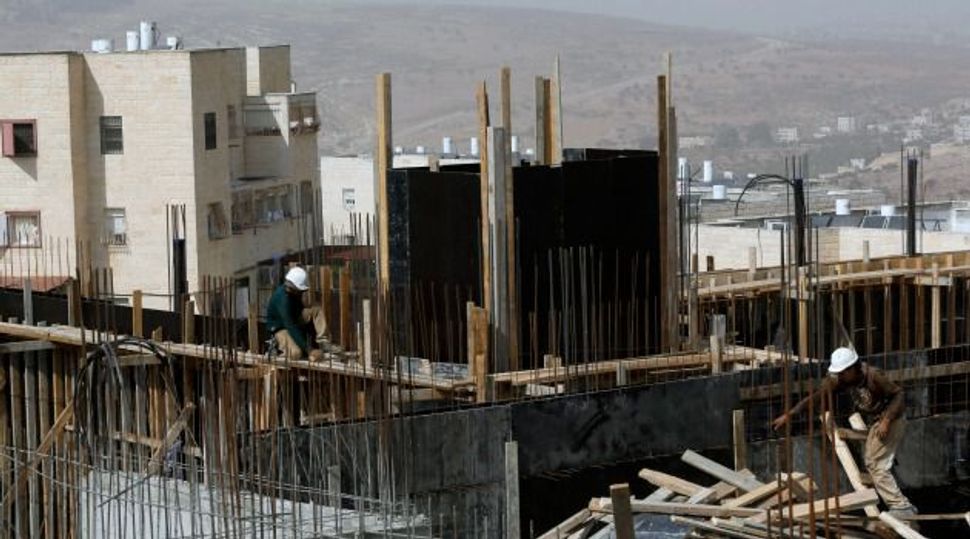 Separate and Unequal: Housing for Jews is taking up more and more of occupied East Jerusalem. Meanwhile, more Palestinians live in forgotten neighborhoods with few services and even fewer rights. Image by getty images

Just a short drive from the stone streets of the world-famous Old City, this is part of Jerusalem’s fractured landscape that no tour group would dare tread, where high-rise tower blocks are packed slapdash along rutted roads.

Marooned behind the wall but within city limits, the Shuafat refugee camp reveals Israel’s uneven treatment of Arab and Jewish neighbourhoods, creating a de facto partition of Jerusalem, which is the epicentre of the Middle East conflict.

“There aren’t even any school buses. It can take us as long as an hour to get home,” Musa said, her daughter’s pink sweatshirt disappearing past the metal turnstiles into the camp, which is fast developing into a lawless slum.

A two-minute drive away lies the massive Pisgat Ze’ev Jewish settlement, whose neat streets and sculpture garden are a parallel universe to the chaos of Shuafat.

“In the settlement they lack for nothing, life is easy. Here, we suffer,” said Musa. Susann goes to school beyond the wall in mainly Arab East Jerusalem and walks home through the checkpoint and the camp, where tens of thousands of people live. Shuafat backs onto the Israeli-occupied West Bank.

Israel captured East Jerusalem in the 1967 Six Day War, and, in a move not internationally recognised, annexed it. Palestinians want it to be the capital of their future state.

The Israeli government renewed U.S.-sponsored peace talks with the Palestinians in July and the status of Jerusalem is likely to be a major stumbling block in the negotiations.

Rights groups estimate almost 100,000 Palestinians with ID papers from Jerusalem live beyond the separation wall – a barrier that started to go up almost a decade ago amid a wave of suicide attacks during a prolonged Palestinian uprising.

This represents nearly a third of the city’s registered Arab residents, who in turn make up almost 40 percent of its population of 804,400, the Central Bureau of Statistics says.

But having marginalised these communities, there is no indication that Israel intends to relinquish control to the Palestinian Authority, which has limited self-rule in the adjacent, occupied West Bank.

Instead, through systematic neglect and curbs on Arab expansion, Israel is redrawing the city’s demographic balance in favour of Jews, some Israeli and Palestinian officials say.

“The current policies relating to these neighbourhoods are part of a political agenda, to try to prevent or at least postpone the day Palestinians become a majority,” said Meir Margalit, an outgoing city council member, who has worked closely with residents of majority-Arab East Jerusalem.

“It’s for demographic, not security reasons,” he said.

This has left residents trapped in a dysfunctional limbo. They pay municipal taxes which bring some health care and insurance benefits, but enjoy few city services, which means locals must burn their trash and dig their own sewers.

Unbridled crime, guns, drugs and unregulated building have sprung up in the absence of authority.

A near total lack of education, policing and planning by Israel in Jerusalem areas past the wall render them far worse off from the more central Arab neighborhoods, where poverty and employment already far exceed rates in Jewish ones.

Some 77 percent of Jerusalem’s non-Jewish households live beneath the poverty line against 25 percent of Jewish families, the United Nations said in a report in May.

“Israel is turning these places into slums, not allowing the Palestinian Authority to take responsibility for them, but refusing to do so itself,” said Hanan Ashrawi, a senior diplomat in the Palestine Liberation Organization.

The office of Jerusalem’s newly re-elected mayor Nir Barkat said in a statement that it works to “close the gap that has deepened due to the decades of neglect in parts of the city”.

City Hall representatives declined to elaborate on policies in the neighbourhoods despite repeated requests by Reuters.

Last month, Israel approved plans for hundreds of new settler homes in East Jerusalem’s Jewish communities, including Pisgat Ze’ev. The same day, summonses for illegal building were delivered to 18 buildings that house dozens of Palestinian families around Shuafat, raising the spectre of demolition.

“Here there’s no Israeli presence. They built a wall and put us behind it,” said Nabeel Ghaith, whose small store in the Ras Khamis district received one of the notices.

“Where is the democracy for us? It’s just for them.”

Mayor Barkat has proposed that the areas behind the wall be put under the control of the Israeli military, saying they had become too dangerous for municipal workers to enter.

The plan was put on hold after it was met with outrage from residents and even from right-wing Israeli politicians, who oppose relinquishing any of the city.

Outgoing deputy mayor Naomi Tsur told Reuters that not just the Israeli right but also Palestinians – who discourage any local cooperation with Israel in Jerusalem – have stifled development, causing “all pragmatism to exit the scene.”

“I don’t know what guided the line-drawer’s hand when he routed the security barrier,” she said. “But if there hadn’t been suicide bombers coming in blowing up people on buses, it wouldn’t have been necessary.”

Shuafat locals complain that crime, like drug trafficking, goes largely unchecked, with Israeli police unwilling to get involved, yet refusing to allow their Palestinian counterparts to enter the desolate districts.

“These have become grey security areas for us,” said Major General Adnan Damiri of the Palestinian security forces.

One night in September, Shuafat resident Ziad Dweik clenched his pistol and launched into a gun battle with relatives of his estranged wife over custody of his son.

By the time Israeli security forces arrived, three hours later according to residents, Dweik was dead. The police post, near the camp’s main checkpoint, is a five-minute drive away.

“In a normal situation, a case like this could have been resolved by courts or social services. But so few institutions are allowed in here that it’s become normal for families to resort to violence,” said a local aid worker who was not authorised to speak to the media and asked not to be named.

The resident of another Arab neighbourhood lost behind the barrier, Kufr Akab, said shooting often rang out at night.

“You just keep the family inside until it ends,” he said. “It doesn’t feel safe but what can we do? If we leave we lose our IDs,” he added, declining to be named because of an ongoing residency dispute with Israel.

Israel has cancelled the Jerusalem IDs of over 14,000 Arab residents since capturing the city in 1967 – more than half of them since 2006, according Israel’s interior ministry.

Israeli law designates Arab ID holders as “permanent residents,” whose status can be revoked if authorities conclude their “centre of life” – homes or work – is not in the city.

The cancellation rate has slowed in recent years, with just 116 in 2012, but official town planning that is skewed against their natural expansion gives many Arab residents few options but to shift into the adjacent West Bank or to break the law.

Palestinians in and around Shuafat have lacked officially approved residential plans for over 45 years, according to the Israeli building rights group Bimkom – meaning any construction since then is illegal and subject to possible demolition.

Satellite maps mark the distinction clearly: the Jewish settlements are concentric rings of ordered streets and red-roofed homes embraced by green space. The Arab fringes are a fuzzy grey rash of disorder.

“They’ve built without permits not because they wanted to break the law, but because they had to make shelter for their families,” said Sari Kronish, an architect with Bimkom.

The total area designated for Palestinian housing covers only 14 percent of East Jerusalem, and only 7.8 percent of Jerusalem in total, according to Israeli rights group ACRI.

In Jewish neighborhoods, there was an average of 20 square metres (215 sq ft) of housing per resident, compared to just 12 (130) in Palestinian neighbourhoods, it said.

How to divide Jerusalem between Israel and the Palestinians has frustrated decades of peace talks.

Washington has long envisioned a deal that would keep intact the city’s settler suburbs, home to more than 150,000 Israelis, and give Palestinians control of majority Arab areas.

But many Israeli right wingers reject this and despite the increasingly clear lines of Israeli control within the city, a number of Arab residents see little chance of change, for now.

Puffing on a cigarette on the roof of one of Shuafat’s at-risk housing towers, residents’ association head Khader Dibs traces with his finger the broad sweep of Israel’s wall.

“We’re out of sight to them, but they still want to control us, not let go of their sovereignty on this place,” he said.