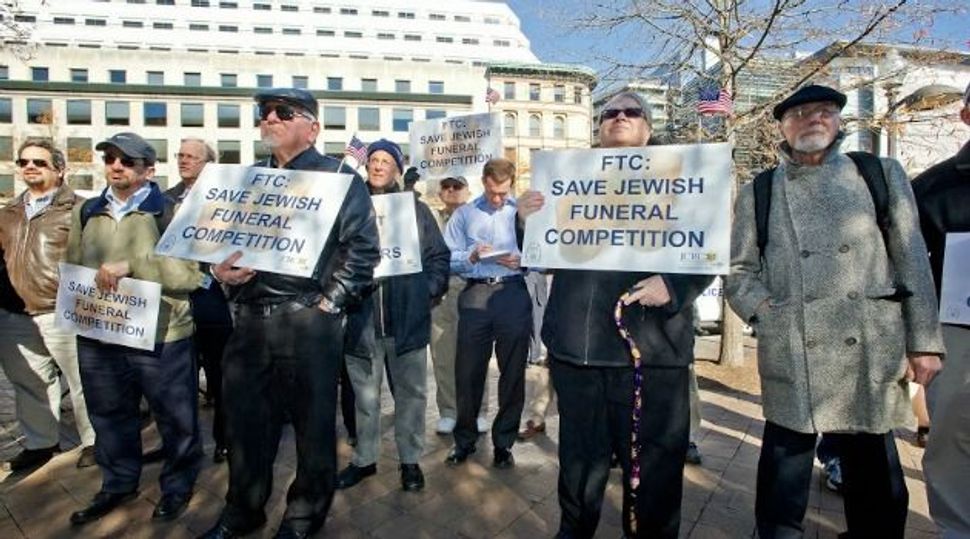 Jewish community members had protested the acquisition last month at the offices of the Federal Trade Commission in Washington, fearful the price of Jewish funerals at the Stewart-owned Hines-Rinaldi Funeral Home in Silver Spring, Md., would rise in the wake of the acquisition. Under the terms of a contract with the Jewish Funeral Practices Committee of Greater Washington, Hines-Rinaldi allows for a Jewish funeral that costs approximately $4,000 less than the average funeral in the Washington area.

The Houston-based Service Corporation International will acquire Hines-Rinaldi under the deal. But the company agreed to sell off 91 properties, including two Jewish funeral homes in Maryland, to resolve antitrust concerns raised by the Jewish Funeral Practices Committee.

David Zinner, the committee’s vice president and executive director of Kavod v’Nichum, a group serving Jewish burial societies throughout North America, told JTA by e-mail he was pleased the FTC recognized “the SCI acquisition of Stewart would create too much concentration in the Jewish funeral market in the Washington, D.C. area.”