Immigration to Israel Rises by 7% — Led by French 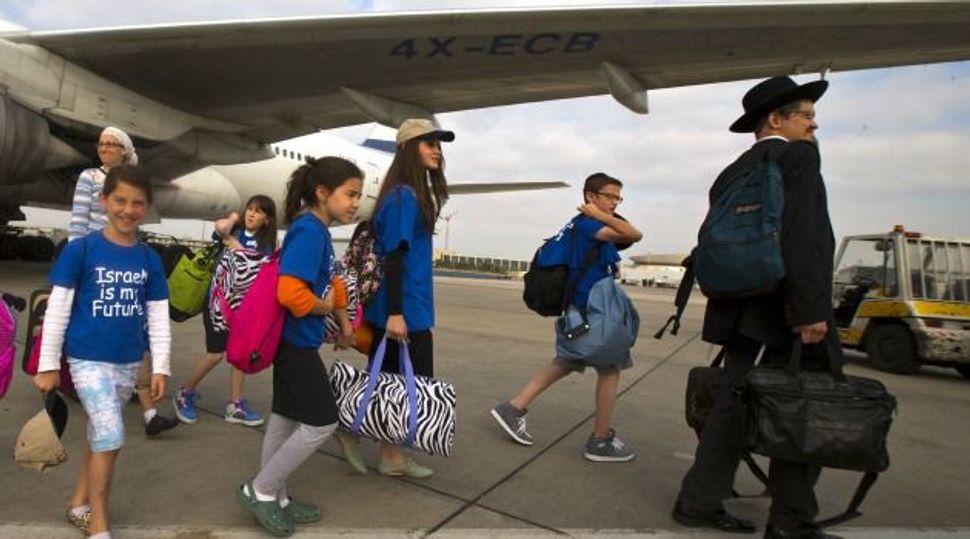 Israel welcomed some 19,200 new immigrants in 2013, with French Jews leading the way.

The number of new immigrants in 2013 was a modest increase from the 18, 940 who arrived in 2012, the Jewish Agency for Israel said in a statement.

The year 2013 saw a 7 percent increase in aliyah from most countries, with the exception of Ethiopia, whose numbers are set by the Israeli government. This past year marked the conclusion of Operation Dove’s Wings, which brought the remainder of those in Ethiopia who have been deemed eligible to immigrate to Israel.

The most dramatic increase in aliyah numbers was from France, with 3,120 immigrants, a 63 percent increase over the previous year. The Jewish Agency credited its programs to introduce French young people to Israel with much of the increase.

The statement said that the Ministry of Immigration and Absorption and The Jewish Agency are set to introduce in the coming year new programs to ease the immigration and absorption process and make it easier for Israelis residing in France to return to Israel.

Another 321 immigrants made aliyah from Canada, about the same as last year’s 319.

The largest group of immigrants to Israel in 2013 came from the former Soviet Union and numbered 7,520, compared to last year’s 7,629, a 1 percent decrease.

Some 2,400 new immigrants chose to settle in Jerusalem, and another 1,650 headed to Tel Aviv.

“The 2013 data proves that more and more Jews around the world realize that Israel is their home. Every immigrant who arrives in order to make his or her home in Israel fills me with joy and I hope aliyah continues to increase,” said Minister of Immigration and Absorption Sofa Landver.

“This is an era of aliyah by choice, rather than aliyah of rescue, and so it is important that we continue The Jewish Agency’s efforts to strengthen the young generation’s Jewish identity and deepen their connections to Israel,” Chairman of the Executive of the Jewish Agency Natan Sharansky said.

Immigration to Israel Rises by 7% — Led by French