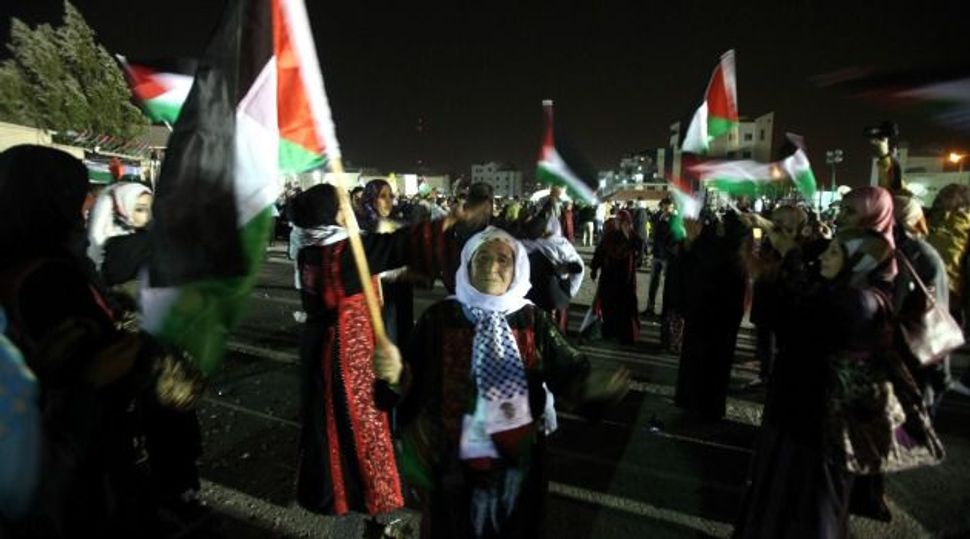 Free at Last: Relatives of freed Palestinian prisoners gathered in October to welcome them home in the West Bank. Another round of prisoners is expected to be freed Tuesday morning. Image by getty images

Some 26 Palestinian prisoners were transferred to Ofer Prison in preparation for their release as part of the revived Israeli-Palestinian peace talks.

Meanwhile, Almagor – a group representing terror victims – on Monday asked Israel’s Supreme Court to prevent the release of six of the prisoners, who are residents of eastern Jerusalem and hold Israeli identification cards.

The prisoners, who will be released at 1 a.m. Tuesday, were being examined by the Red Cross and by doctors, and their identities were being checked.

It is the third round of Palestinian prisoner releases since the American-backed peace negotiations began in July. The list was published late on Saturday night on the Israel Prison Service website. Anyone who objects to the release of a prisoner must appeal to Israel’s Supreme Court within 48 hours.

The prisoners to be released committed their terror acts before the Oslo Accords, and have served at least 19 years in an Israeli prison, according to a statement released Saturday night by the Prime Minister’s Office. According to the statement, “if any of those to be released resume hostile activity they will be returned to serve the remainder of their sentences.”

Some 23 of the prisoners were convicted of killing Israeli soldiers, civilians or Palestinians accused of collaborating with Israel.

Demonstrations against the release including family members of terror victims, have been held outside the Prime Minister’s Jerusalem residence for the last several days, with a large-scale protest and vigil planned for Monday night. While the group’s request to hold the large-scale protest beginning on Sunday night through the release was at first denied, Jerusalem Mayor Nir Barkat told demonstrators he would see to it that they be allowed to hold the protest.