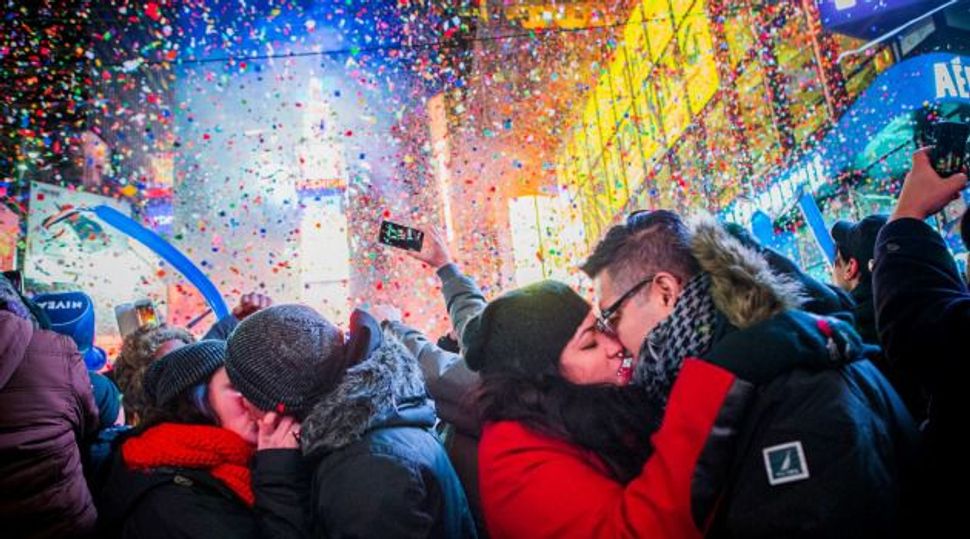 From Sydney to London to San Francisco, revelers welcomed 2014 with extravagant fireworks displays, giant street parties and, in a new departure, fruit-flavored mist.

In New York, hordes of people, many decked out in cartoonish hats, waving balloons or ringing bells, shrugged off freezing temperatures and heightened security in Times Square for the annual New Year’s Eve street party.

U.S. Supreme Court Justice and New York native Sonia Sotomayor helped to usher in 2014 by pushing a button to signal the lowering of the 11,875-pound, crystal-encrusted ball and leading a 60-second countdown.

The stroke of midnight triggered a deluge of confetti and music in Midtown Manhattan.

“We’ve been living on granola bars and little bottles of water because if you move, you lose your spot,” said Sheila Harshbarger, who traveled to New York from Indiana with her daughter and staked out ground next to a row of police barricades in the freezing cold more than 14 hours before midnight.

Crew members on board the International Space Station orbiting the globe sent greetings to the Times Square crowd.

The celebrations were not without violence, however.

Several hours before the ball dropped in Times Square, two men were slashed at a nearby bus station in what a Port Authority spokesman said was a dispute over tickets.

Brasstown, in the mountains of North Carolina, held its 20th New Year’s Eve “possum drop” – in which a Plexiglas container containing a caged opossum is “dropped” at midnight.

“If New York can drop a ball … then we can lower the opossum,” organizers explained on their website.

The event got a last-minute go-ahead after a judge refused a plea by animal-rights group People for the Ethical Treatment of Animals to stop the event.

Across the northern United States, partygoers had to deal with snow and freezing temperatures, said Roger Edwards, a meteorologist with the National Weather Service.

Chicago was offering free rides on trains and buses from 10 p.m. to 4 a.m. to ensure revelers make it home safely.

Residents in Vincennes, Indiana, didn’t let the cold stop their fifth annual Watermelon Drop and Fireworks – a nod to the area’s agricultural roots.

In Nashville, Tenn., revelers saw the “Music Note Drop” backed up by musical performances, including by Hank Williams Jr., and fireworks.

But not everyone partied in the streets. President Barack Obama celebrated the end of 2013 with a low-key foray to buy a cherry and lemon-lime “shave ice” in his native Hawaii before retreating to a vacation rental.

In San Francisco, one of the last major cities in the world to see the clock strike midnight, thousands saw waterfront fireworks illuminate the Golden Gate Bridge.

To the north, in a foggy Seattle, huge crowds gathered for a fireworks display launched from the Space Needle tower.

In Los Angeles, long notorious for lacking a centralized New Year’s Eve celebration befitting its association with glitz and glamour, organizers pulled together a free outdoor arts and music festival in and around downtown’s Grand Park.

Nineteen hours earlier, a massive fireworks display lit up the sky around the Harbor Bridge and Opera House in Sydney, Australia. In the Middle East, Dubai broke the Guinness World Record for the largest fireworks display, the website Emirates247 reported.

In London, edible banana confetti and strawberry mist rained from the sky as fireworks along the River Thames lit up Big Ben and other landmarks.

Across the United States, 2014 ushered in political changes and the official start of a slate of new laws.

New York City’s new mayor, Bill de Blasio, was sworn in at midnight in a private ceremony at his home in Brooklyn, succeeding Michael Bloomberg, who left office after 12 years. He was due to be formally inaugurated later at City Hall.

Americans who have signed up for new healthcare coverage under President Barack Obama’s Affordable Care Act were due to begin receiving benefits on Jan. 1.

Before ushering in 2014, Sotomayor, the U.S. Supreme Court Justice, granted Roman Catholic-affiliated groups a temporary exemption from a part of the Obamacare healthcare law that requires employers to provide insurance policies covering contraception.

Also starting New Year’s Day, Colorado residents were legally permitted to buy an ounce of marijuana at a time from specially regulated retailers.

Possession, cultivation and private personal consumption of marijuana by adults has already been legal in Colorado for more than a year.

“It will be like people waiting in line for tickets to a Pink Floyd concert,” said Justin Jones, 39, owner of Dank Colorado in Denver, who has run a medical marijuana shop for four years and now has a recreational pot license.