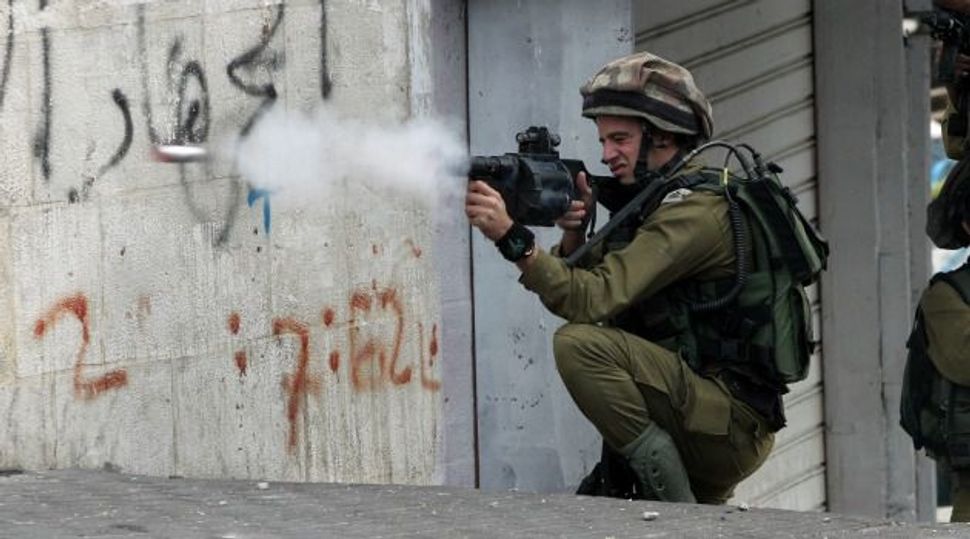 Rising Toll: Israeli soldiers fire tear gas at Palestinian demonstrators in Hebron on the occupied West Bank, where killings of Palestinians tripled in 2013. The first victim of 2014 was an 85-year-old man. Image by getty images

An 85-year old Palestinian died on Thursday after inhaling tear gas fired by the Israeli army to disperse protesters in the occupied West Bank, witnesses said.

He is the first Palestinian casualty of the conflict with Israel in 2014 following the clash with soldiers on the outskirts of Kufr Qaddoum village near Nablus.

An Israeli military spokeswoman confirmed that a clash had broken out.

“Last night, a violent riot took place in the village of Qaddoum in which Palestinian residents hurled rocks at security forces, who responded with riot dispersal means,” she said.

The military is investigating the incident.

Youths in the village were on Wednesday celebrating the 49th anniversary of the founding of the Fatah movement, the party of Palestinian President Mahmoud Abbas, when the clash erupted.

Villagers told Reuters the soldiers fired dozens of tear gas canisters at them, one of which entered Saeed Jaser Ali’s home. He was taken to a hospital, where he died early on Thursday.

U.S. Secretary of State John Kerry is expected to return to the region on Thursday to aid peace talks between the Israelis and Palestinians.

The negotiations, revived in July after a three-year hiatus, have made no outward progress and Palestinian officials have threatened to take Israel before the International Criminal Court for Jewish settlement activity and killing civilians.

Violence in the West Bank has increased in recent months, and at least 19 Palestinians and four Israelis have been killed in the occupied territory since the negotiations resumed.

Human rights group B’Tselem, which monitors the Israeli-Palestinian conflict, said that the number of killings in the West Bank in 2013 had jumped three-fold over the previous year.