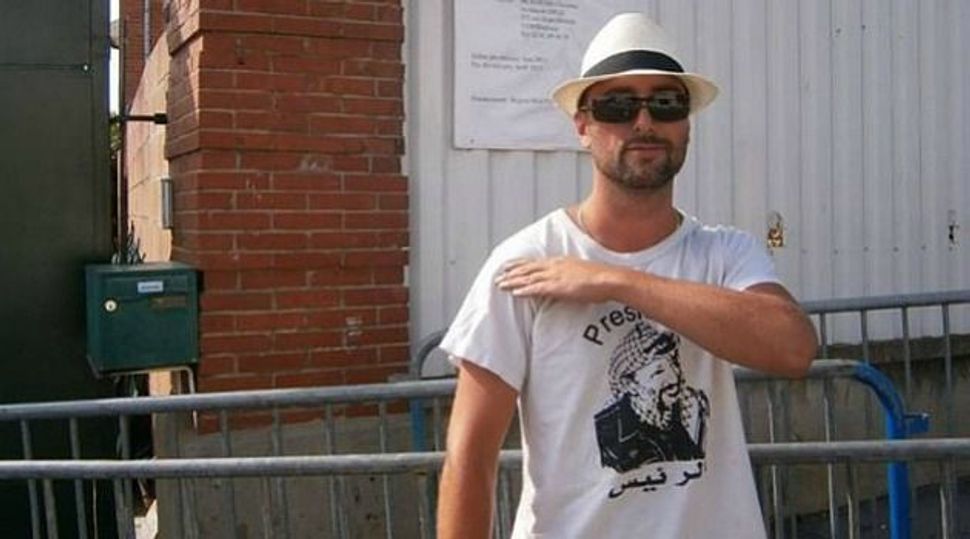 Sign of Hate: Police are hunting for this man who performed the controversial ?quenelle? gesture in front of the Jewish school in Toulouse where several children were killed in a 2012 rampage.

French police are searching for a man who performed an anti-Semitic gesture at three locales connected to the murder of Jews.

The search for the man, whose identity is not yet known, began last week after a photo of him surfaced online in which he performed the quenelle, a quasi-Nazi salute, in front of the Toulouse school where the Muslim extremist Mohammed Merah murdered four Jews in 2012.

The same man was seen performing the quenelle outside the former residence of Merah, who was killed during a shootout with French police, according to research done by the French Jewish news site JSSnews.com. Additionally, he posed while performing the quenelle near a monument commemorating the Holocaust in Paris. Police sources in Toulouse told French media the man is wanted for questioning.

The quenelle is the name given to the gesture of placing one’s left palm on one’s right shoulder by its inventor, he comedian Dieudonne M’bala M’bala, who has been convicted several times for inciting hatred against Jews and who is facing an eighth trial for suggesting a French Jewish journalist belonged in a gas chamber.

It is widely seen as echoing the Nazi salute but is too vague to violate France’s laws against displaying Nazi symbols. In recent months, the quenelle’s popularity has soared in France, with several celebrities performing it on national media.

On Tuesday, French Interior Minister Manuel Valls – who last week said he would seek a ban on public performances by Dieudonne — indicated for the first time he may also seek a ban on the gesture, which he said is a form of incitement to hatred despite claims that it is merely anti-establishment rather than anti-Semitic.

Meyer Habib, a French Jewish lawmaker, on Monday wrote on Twitter that he will submit a bill which proposes to ban the gesture.