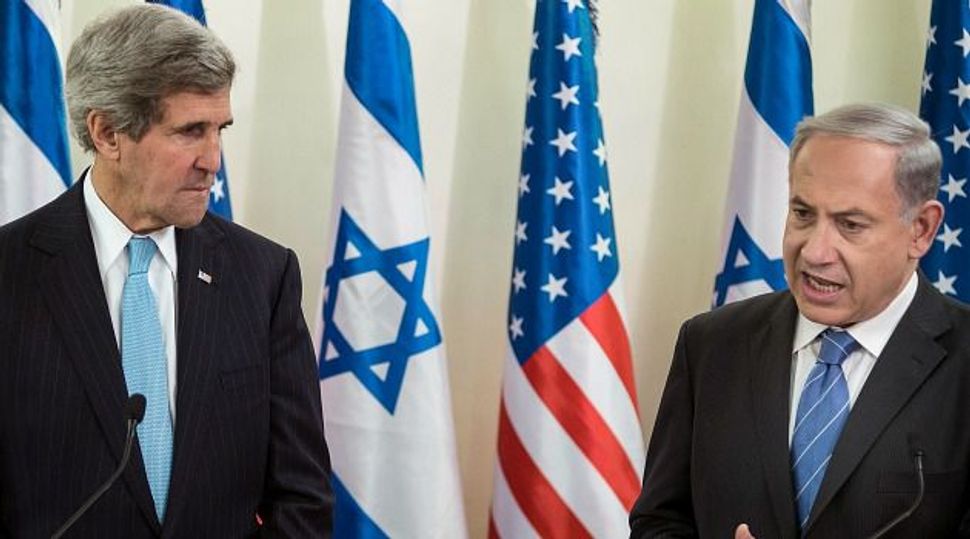 Israeli Prime Minister Benjamin Netanyahu offered a gloomy assessment of peace prospects with the Palestinians on Thursday as U.S. Secretary of State John Kerry began his 10th visit to the region in pursuit of a deal.

“There is growing doubt in Israel that the Palestinians are committed to peace,” said Netanyahu, speaking with Kerry at his side and accusing Palestinian officials of orchestrating a campaign of “unabated incitement” against Israel.

In the days before Kerry’s latest trip to Jerusalem, Palestinian leaders have likewise accused Israel of trying to sabotage the talks aimed at ending their decades-old conflict.

Kerry focused his remarks on a continued U.S. push toward a final peace agreement, which Washington hopes to achieve by April, and his shorter-term pursuit of a framework deal that would pave the way for a permanent accord.

He said Israeli and Palestinian leaders were nearing the point, or were already at it, where they would have to make tough decisions, and he pledged to work with both sides more intensely to try to narrow differences on a framework agreement.

Guidelines in such an accord would address core issues such as the borders of a future Palestinian state, security, Palestinian refugees and the status of Jerusalem, Kerry said.

“It would create the fixed, defined parameters by which the parties would then know where they are going and what the end result can be,” he said. “This will take time and it will take compromise from both sides, but an agreed framework would be a significant breakthrough.”

On key issues in the conflict, leaders from both sides have sounded far apart this week.

Israeli Deputy Foreign Minister Zeev Elkin on Thursday rejected the creation of a Palestinian state based on the lines pre-dating the 1967 Six-Day War, in which Israel captured and occupied Gaza, East Jerusalem and the West Bank.

“The Jordan Valley must be under Israeli sovereignty forever,” he said, referring to the border area with Jordan, from which Palestinians want a full Israeli withdrawal.

“The 1967 borders are Auschwitz borders,” Ha’aretz newspaper quoted him as saying, suggesting that a return to the narrower boundaries that existed before the conflict would lead to the destruction of Israel.

On Tuesday, Palestinian President Mahmoud Abbas renewed a call for all Israeli settlers and soldiers within the lands captured in 1967 to be withdrawn, saying he would not hesitate to reject a bad deal.

“We will say ‘yes’ to any ideas suggested to us which meet our rights. But we will not fear and will not hesitate for a moment … to say ‘no’, whatever the pressure, to any proposal which detracts from or doesn’t fulfil the higher national interests of our people,” he said in a speech.

Palestinian chief negotiator Saeb Erekat last month said a framework agreement could allow the talks to be continued for another year. However, earlier this week, he said the U.S.-brokered talks were “failing”, and threatened to haul Israel before the International Criminal Court.

Speaking to reporters on Tuesday, a senior U.S. State Department official said Kerry was not expecting a breakthrough during his latest visit, when he will also meet with Abbas.

Kerry said on Thursday he did not intend to impose U.S. ideas, but to “facilitate the parties’ own efforts”.