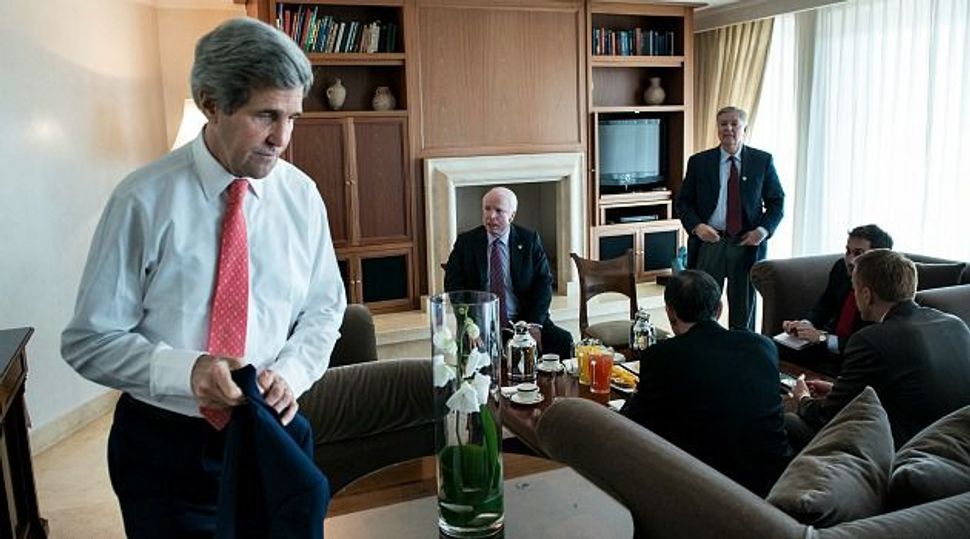 Where?s Progress? Secretary of State John Kerry meets with Sen. John McCain in Jerusalem. Protests greeted his planned visit to the West Bank, where Palestinians are angry at the slow pace of peace talks. Image by getty images

Palestinian protesters on Friday condemned the latest efforts by U.S. Secretary of State John Kerry to advance peace talks with Israel, using chants evoking the Arab uprisings and telling him to go home.

Hours before Kerry was due to meet Palestinian President Mahmoud Abbas, a raucous crowd of several hundred took to the streets of Ramallah, the West Bank’s de facto capital, chanting “Kerry, you coward, there’s no place for you in Palestine!”

Separately, an official close to Abbas dismissed Kerry’s drive for a “framework agreement” as biased toward Israel.

Kerry has said such an accord would narrow gaps between the sides and pave the way for a final deal when the nine-month period allotted the U.S.-backed talks expires on April 29.

“The Palestinian side will not even look at a worthless piece of paper, a framework agreement, which contains general principles for later negotiations, when the two sides have already been negotiating for months and years,” Abed Rabo said in a statement published in the al-Ayyam newspaper on Friday.

Palestinian and Israeli officials have publicly differed on the future status of the West Bank’s border with Jordan, where Israelis want a permanent security presence but Palestinians want a full withdrawal of Israeli soldiers and Jewish settlers.

Israel said last week it planned to build another 1,400 homes in settlements in the occupied West Bank.

Kerry has told reporters that the agreement, besides borders and security, would aim to address all the conflict’s key issues such as refugees and Jerusalem.

The U.S. top diplomat held five hours of talks with Israeli Prime Minister Benjamin Netanyahu on Thursday and saw him again on Friday. He is due to see Abbas later in the day.

Around three hundred activists with the left-wing Democratic Front for the Liberation of Palestine party rallied in downtown Ramallah hours before Kerry’s scheduled arrival.

“The people want the fall of the framework!” they chanted, evoking the chants heard in protests throughout the Middle East in 2011. “It’s clear, Kerry, we don’t want to see you! The Americans are the enemy of our people!” they added.

Dozens of riot policemen and plainclothes security forces prevented their march from reaching Ramallah’s presidential compound, where Abbas was expected to receive Kerry.

U.S. Republican Senator John McCain, who is also in Israel and has conferred with the Israeli Prime minister, told a news conference on Friday that Netanyahu doubted the proposals.

“Netanyahu has serious, serious concerns about the plan as it has been presented to him, whether it be on the ability of Israel to defend its borders, on the reliability of a Palestinian state … and particularly on the overall security,” he said.