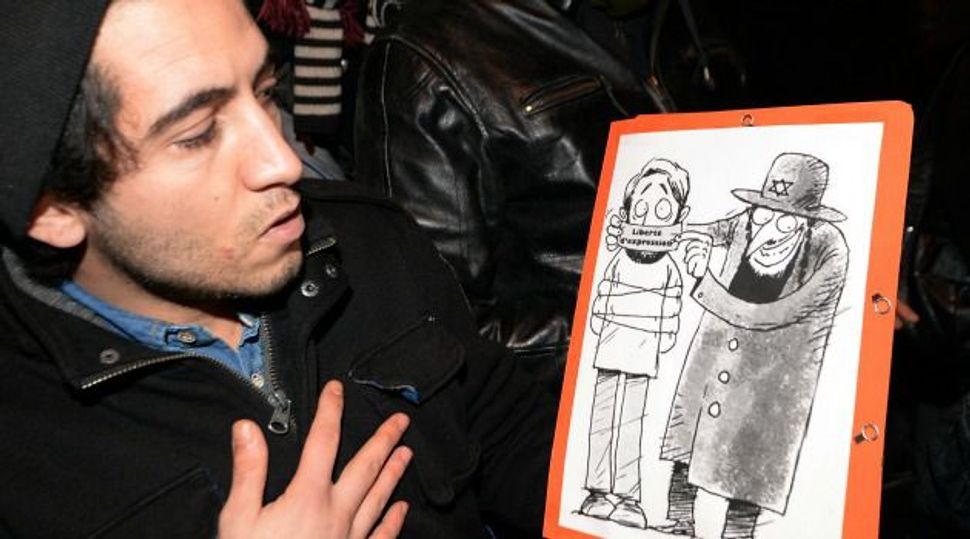 Bad Picture: Supporter of controversial French comic Dieudonne holds a caricature of a Jew to protest the possible banning of the comedian for inciting hatred. Image by getty images

French comedian Dieudonne M’bala M’bala complained to police about threats to blow up the theater in which he performs.

The bomb threat was made Thursday against the Main D’Or theater, which Dieudonne operates, in Paris’ 11th arrondissement, according to MetroNews.fr. Police rushed to the scene but found no explosives.

Performances by Dieudonne, a professed anti-Semite and inventor of the quenelle anti-Semitic salute, have been targeted in the past by activists of the Ligue de Defense Juive, the local branch of the JDL.

Last week, six men believed to be linked to JDL were arrested in Lyon for allegedly assaulting two individuals who posted online pictures of themselves performing the quenelle, a quasi-Nazi salute which French Interior Minister

Manuel Valls said Tuesday was a gesture of hate and anti-Semitism. In recent months, several athletes in France and beyond were seen performing the quenelle, which is believed to be gaining traction in French society.

But Kick it Out, a prominent British organization working to curb soccer racism, issued a guarded statement saying only that it will assist Britain’s Football Association in investigating Anelka’s behavior. Anelka has ignored calls to apologize, saying the salute was a gesture to his friend Dieudonne.

John Mann, chair of the Inter-Parliamentary Coalition for Combating Anti-Semitism at the European Parliament, blasted Kick it Out for not using stronger language.

“Not good enough,” Mann wrote on Twitter last week. “You should be leading on challenging this racism. Your statement is weak and puny.”