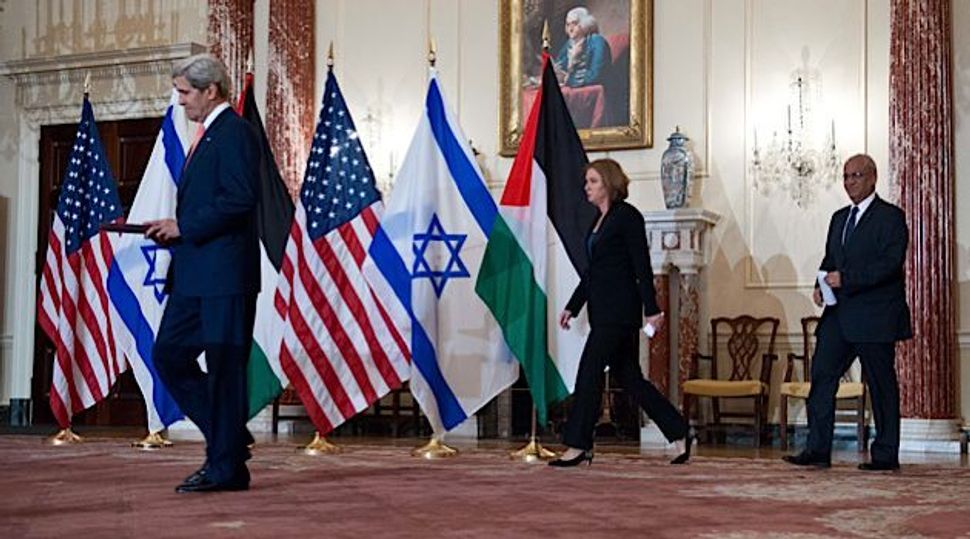 U.S. Secretary of State John Kerry said on Sunday the Israelis and Palestinians were making some progress in peace talks, though there was still a chance no accord would be reached.

Speaking before he flew to Jordan and Saudi Arabia to brief their rulers about his 10th visit to the region to see Israeli Prime Minister Benjamin Netanyahu and Palestinian President Mahmoud Abbas, Kerry said both sides had a sharper idea of the compromises needed to secure an agreement.

“This has been a productive couple of days,” Kerry told reporters. “We have had very positive – but I have to say very serious, very intensive – conversations.”

Kerry said all of the major issues in the conflict – borders, security, the fate of Palestinian refugees and the status of Jerusalem – were under discussion.

“The path is becoming clearer. The puzzle is becoming more defined. And it is becoming much more apparent to everybody what the remaining tough choices are,” he said.

He added he would not be flying to meet the kings of Jordan and Saudi Arabia if he did not believe both sides were grappling with the issues.

“But I cannot tell you when, particularly, the last pieces may decide to fall into place or may fall on the floor and leave the puzzle unfinished,” added Kerry, due to return to Jerusalem later on Sunday.

Kerry has been trying to establish what U.S. officials call a “framework” for guidelines for an eventual peace accord.

Kerry later spent an hour with Jordan’s King Abdullah in Amman discussing the peace talks, Syria’s civil war and violence in Iraq. He then flew to Riyadh for about two-and-a-half hours’ talks with Saudi King Abdullah.

The U.S.-brokered Israeli-Palestinian negotiations resumed last July after a three-year halt, with Kerry leading the push for an accord within nine months. But both sides have expressed doubts about his efforts.

Palestinians see a major obstacle in Israel’s settlements. Many Israelis question Abbas’s credibility, especially as Gaza is run by his rivals – Hamas Islamists who oppose peacemaking.

Israeli Foreign Minister Avigdor Lieberman, a far-right partner in the coalition government, demanded on Sunday that any peace accord entail an “exchange of populations and territory” with a future Palestinian state.

That referred to Lieberman’s long-held vision of Israel keeping blocs of settlements now in the occupied West Bank while redrawing its border so some Arab communities fell under Palestinian jurisdiction.

The Palestinians, and many of their kindred Arabs who make up 20 percent of the Jewish state’s population, balk at Israeli bids to revise the boundary of the West Bank which, along with East Jerusalem and the Gaza Strip, was captured in a 1967 war.

Lieberman, who had been vocal in his pessimism about chances for a deal, gave qualified backing to Kerry’s diplomatic drive.

“Any alternative proposal we’ll get from the international community will be much less comfortable for us,” he told a meeting of Israeli ambassadors in Jerusalem.

Yasser Abed Rabbo, a senior Palestinian official, called the ongoing talks “serious”, but told Voice of Palestine radio: “I can’t say now that there’s any actual or substantial progress in all the discussions.”

Broad Arab support is viewed as crucial if the Palestinians are to make the compromises likely to prove necessary to strike a deal with Israel. Kerry has also said he plans to meet a group of Arab foreign ministers next weekend.

While giving scant detail on his mediation, Kerry has said progress was being made. But both Israel and the Palestinians have predicted the target date for a deal will not be met.