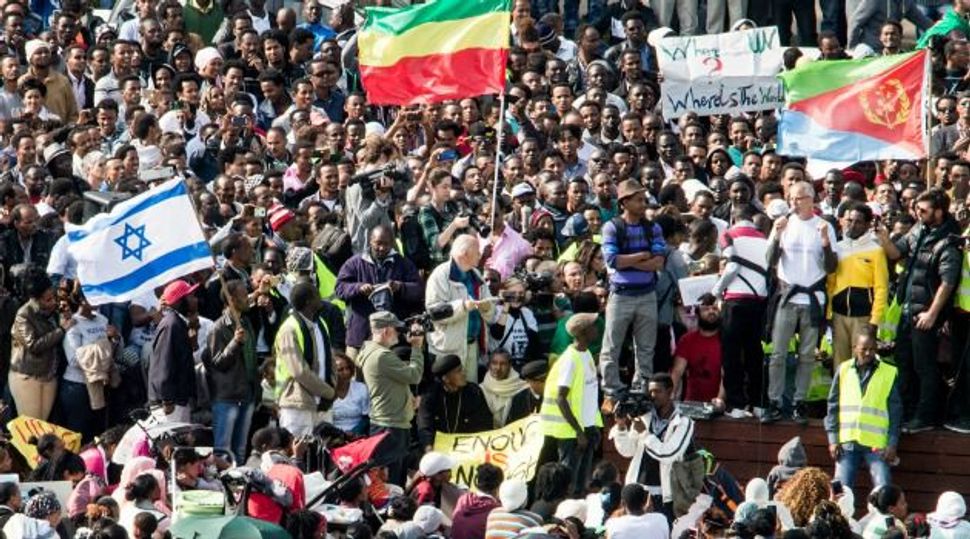 Freedom March: Thousands of African immigrants marched on the U.S. embassy in Tel Aviv demanding freedom for those detained in a desert jail. Image by getty images

Several thousand African migrants protested outside Western embassies in Tel Aviv on Monday, demanding freedom for compatriots jailed by Israel in a desert facility under a new open-ended detention law.

“No more prison,” chanted the crowd that packed a Mediterranean beachfront promenade across from the U.S. embassy.

Protesters also marched to the French, Italian, British, Canadian and German embassies to hand over letters appealing for international support against Israel’s detention policy toward migrants it sees as illegal job-seekers.

Three weeks ago, Israel’s parliament approved the law permitting authorities to detain migrants without valid visas indefinitely. The measure has been condemned by critics as a violation of human rights.

Some 60,000 migrants, largely from Eritrea and Sudan, have crossed into Israel across a once-porous border with Egypt since 2006, Israeli authorities say.

Many say they want asylum and safe haven. Prime Minister Benjamin Netanyahu has said he views the presence of many of the Africans as a threat to Israel’s Jewish social fabric.

An Israeli border fence has cut off the African influx from Egypt since 2012, but migrants who have already crossed can be sent to what the government describes as an open prison in Israel’s southern desert.

On Sunday, more than 10,000 Africans demonstrated outside Tel Aviv city hall on Sunday on behalf of what human rights groups said are more than 300 migrants arrested since the detention law went into effect.

Dozens more have been summoned for detention, among them men with wives and children, rights activists and the United Nations High Commission on Refugees (UNHCR) said.

The new detention facility resembles a half-way house. Detainees can leave but must report back three times a day, including at nightfall, and may be held without a time limit pending voluntary repatriation, implementation of deportation orders or resolution of their asylum requests.

“Placing asylum-seekers in duress that may force them to opt to return without having examined their asylum claims could amount to a violation” of international refugee conventions, Walpurga Englbrecht, the UNHCR representative in Israel, said in a statement on Sunday.

Israel’s newest detention facility “would appear to operate as a detention centre from where there is no release”, she said.

“But Israel isn’t their home and we will make efforts to ensure it won’t become a state of infiltrators,” he said.

Hotline for Migrant Workers, an organisation that advocates for the Africans, accuses Israel of pressuring detainees to accept payouts and leave the country. More than a dozen left earlier this year for Eritrea to win release from prison.