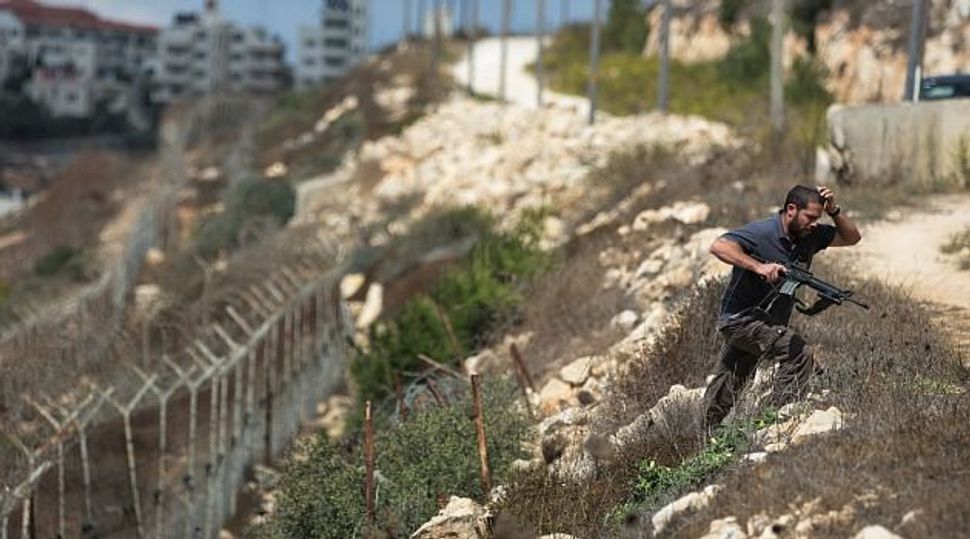 Safe? An Israeli soldier inspects a fence surrounding the settlement of Psagot in Octovber after a Palestinian intruder stabbed a 9-year-old girl. Image by getty images

A Palestinian man was arrested and confessed to stabbing a 9-year-old girl in a West Bank settlement.

Abdullah Abu Kabita, 21, was arrested last week for the October attack on Noam Glick in Psagot. A gag order on the arrest was lifted Monday.

Noam was attacked while standing on the porch of her home. She was treated at Shaare Zedek Hospital in Jerusalem for wounds at the base of her neck, across her chest and on her ear. It is believed shots also were fired during the attack.

The Israeli military considers the attack to be motivated by nationalism, according to Haaretz.

Abu Kabita and an accomplice breached the settlement’s security fence to get to the house. Psagot is located north of Jerusalem and adjacent to Ramallah, the seat of the Palestinian Authority.

On Monday, pipe bombs thrown at Rachel’s Tomb near Bethlehem injured one worshiper. The attack came several hours after a firebombing at an Israeli military base near Bethlehem.

On Sunday, Palestinians threw four firebombs and rocks at an Israeli car riding west of Bethlehem, causing damage to the car.

Also Monday, a rocket fired by Palestinians in the Gaza Strip landed in the Negev Desert, where it caused no damage or injuries.