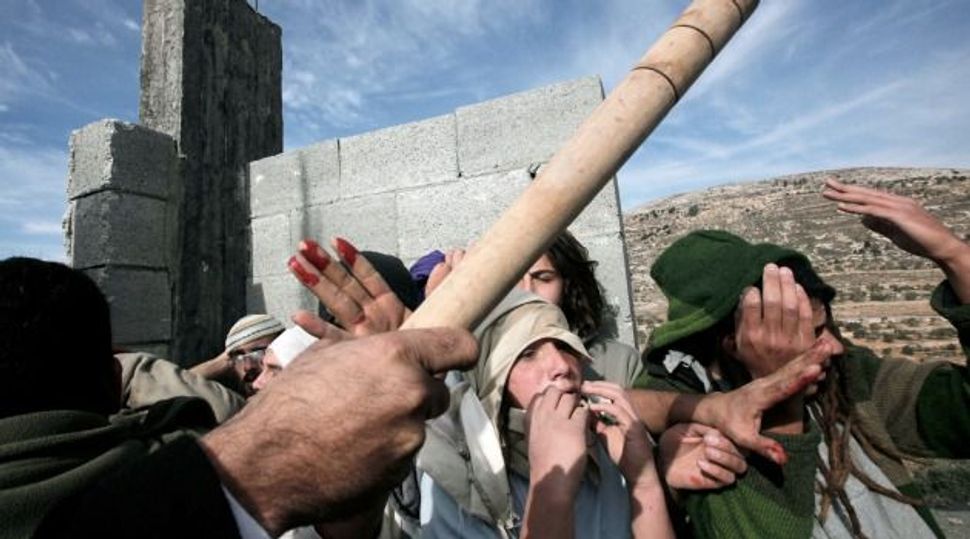 Set Upon: The stick of a Palestinian man is seen as Palestinans from the West Bank village of Qusra beat and detain a group of Israeli settlers at a construction site. Image by getty images

Palestinian villagers on Tuesday detained and beat up a group of Israeli settlers before freeing them, accusing the group of having thrown rocks at farmers tending their fields in the occupied West Bank.

The incident added to simmering tensions between Israeli settlers and Palestinian villagers in the West Bank with the United States struggling to usher forward Israeli-Palestinian peace talks that resumed in July after a three-year halt.

The Israelis, who appeared to be aged between 15 and 30, were detained in an uninhabited house on the outskirts of the Palestinian village of Qusra after what Palestinians said was a settler assault on local farmers.

“I was tending my fields when a group of around 30 settlers came down the hill and attacked us with stones,” Palestinian farmer Mahmoud Tubasi told Reuters.

“We chased them and they fled to a house under construction. They were cornered there and some of the people here beat them – they had attacked us on our own land.”

A Reuters witness said the villagers beat 15 Israeli settlers with their fists and sticks, causing some to bleed from the head and mouth.

The Palestinians later released the group, whom they said came from a nearby Jewish settlement, to Israeli soldiers, after forcing them them pass one-by-one though a gauntlet of residents who rained blows on them.

The Israeli military did not immediately respond to a request for comment.

In another incident, vandals slashed car tyres and scrawled “Arabs=Murderers” and “No co-existence!” on a wall in Jaffa, which has a large Arab population and is part of Tel Aviv on Israel’s Mediterranean coast, police spokesman Micky Rosenfeld said.

There has been a spate of similar attacks on Christian holy sites, Arab and Palestinian communities in recent months by what Israeli authorities generally suspect are hard-line nationalist settlers.

Violence in the West Bank has increased in recent months, and at least 19 Palestinians and four Israelis have been killed in the territory since peace negotiations were revived. A 40-day survey, published two weeks ago by the Israeli human rights group B’Tselem, documented 27 cases of settler attacks on Palestinian farmers during the olive harvest season last fall.

Palestinians seek to create a state in the West Bank and in the Gaza Strip – an enclave ruled by Hamas Islamists opposed to the U.S. peace effort – with East Jerusalem as its capital.

Israel captured the areas in the 1967 Middle East war and pulled troops and settlers out of Gaza in 2005. Palestinians say Israel’s settlements on occupied land – which most countries consider illegal – will deny them a viable state.

Israel’s defence minister said on Tuesday wide gaps remained in the peace talks after U.S. Secretary of State John Kerry’s latest visit and he cast doubt over the chances of reaching a final accord by an April target.

Israel cites historical and biblical links to the West Bank and Jerusalem and says it intends to keep major settlement blocs under any future peace agreement.